Showing posts from October, 2009
Show all

October 28, 2009
Ugandan writer, Ulysses Chuka Kibuuka has written and published three books: a thriller, For the Fairest (Fountain Publishers, 1991); a collection of short stories, Pale Souls Abroad (Fountain Publishers, 2004); and a novel, Saints and Scarecrows (Fountain Publishers, 2007). His first novel, For the Fairest , won the 1993 Uganda Publishers and Booksellers Association (UPABA) Award for best fiction and was reviewed by The New Vision and Radio Uganda , among others. In this interview, Ulysses Kibuuka talks about religion, writing and the state of publishing in Uganda: When did you start writing? I started writing when I was a kid in p4 (Uganda) but first got published 1991 even though I had written For the Fairest in 1980. Uganda had a real hell of a time and education and all that goes with it went to the dogs -- hence the deficit in publishers or enthusiasts. The difference is not much today -- not in terms of security but in terms of respect for literature, writing, etc.
Post a Comment
Read more

October 22, 2009
In the first part of this interview, Dave Brummet talked, among other things, about how most writers today are also having to play a bigger role in promoting and marketing the work that they are producing. Lillian Brummet now gives her views on the work she and Dave are doing. Together they have written and published two "how-to" books, Purple Snowflake Marketing: How to make your book stand out in a crowd (2nd edition, BookLocker, 2009) and Trash Talk: Learn how you can impact the planet (PublishAmerica, 2004) as well as Towards Understanding (PublishAmerica, 2005) a collection of 120 poems on society, the environment and overcoming trauma. They also host two online radio programmes, Conscious Discussions talk radio show and Authors Read radio program. How would you describe your writing? I began with the Trash Talk column because I really believe in the individual’s power to impact the health of the planet with really simple actions. The success of this colu
Post a Comment
Read more

Canadian authors, Dave and Lillian Brummet have written and published two "how-to" books, Purple Snowflake Marketing: How to make your book stand out in a crowd (2nd edition, BookLocker, 2009) and Trash Talk: Learn how you can impact the planet (PublishAmerica, 2004) as well as Towards Understanding (PublishAmerica, 2005) a collection of 120 poems on society, the environment and overcoming trauma. In addition to writing, the Brummets host two online radio programmes, Conscious Discussions talk radio show and Authors Read radio program. In this, the first of two interviews, Dave Brummet talks about the work they are doing: When did you start writing? I’ve been writing all my life. I decided to become published around 1999 after taking a writing course and learning, most importantly, how to present one's self to a publisher. I just felt that writing was my calling and wanted to “follow my bliss” (from Joseph Campbell) -- so to speak. I also educated myself on
1 comment
Read more 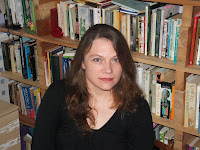 Poet and novelist Gisela Hoyle was born in Barkly-West, in the Northern Cape of South Africa. She attended Kimberley Girls High School and graduated with an MA in English from Rhodes University. She taught at Rhodes University and then at various schools in South Africa. Currently, she lives and works in the UK. The White Kudu (Picnic Publishing, 2010) is her first novel. In this interview, Gisela Hoyle talks about her writing: When did you start writing? I have been writing since I was a child -- mostly poetry and mostly for occasions in the family or at school (I am a teacher). I decided to get published about 18 months ago now -- because I had written my first complete novel, The White Kudu . I took my manuscript to a Writers’ Clinic, where it was positively received, and I got some good advice on how to approach publishers; which I did. How would you describe your writing? Well I don’t think I’m a genre writer. I just write and let other people put it into categories.
Post a Comment
Read more
More posts