Showing posts from March, 2010
Show all

Elements of a story

An interview with Michael J Hunt By Alexander James Michael J Hunt is a very full-time writer … though it took him a lifetime to get there. These days he has acclaimed published novels to his credit, more books in the pipeline, runs a busy writers’ group, edits work for other authors and publishers, and even organises a hugely successful annual literary festival. But, unknown to him at the time, his earlier life was a whirl of research and preparation for the many literary hats he now wears; a hectic history of global travel, adventure, study, diverse work -- and a double brush with death. Now settled in the down-to-earth northern English town of Wigan , he can conjure up memories of scorching desert heat in the depths of a Lancashire winter, of snow-capped mountain peaks as he runs a muddy canal towpath, or of a ten thousand-mile trek around the Australian bush when he’s stuck in a motorway traffic jam. And at the keyboard in a quiet terraced street, he can re-live days in Afr
Post a Comment
Read more 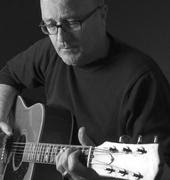 Poet, musician and song-writer, Chris Hardy has written and published two poetry collections, Swimming In The Deep Diamond Mine (Hub Editions 2002) and A Moment Of Attention (Original Plus Press, August 2008). His poems have also been featured in magazines that include Acumen ; Tears In The Fence ; and Poetry Review . In this interview, Chris Hardy talks about his writing: When did you start writing? I started writing poetry at school in the 1960’s, influenced and inspired by reading English poetry, especially John Keats , Wilfred Owen , William Shakespeare and William Blake . As for publishing, this started in the 1970’s when I came across poetry magazines in London, where I was living. I submitted poems to them and began to get published: Stand , Poetry Review and Slow Dancer were amongst the first to take my poems. It was easy to find out how to do this, but to get a collection published, while easier then than now, was still difficult. In fact, I did not think of doing
Post a Comment
Read more 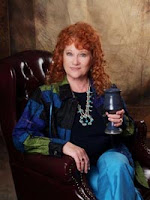 Medieval Life & the Supernatural By Alexander James Publishers, with their obsessive desire to pigeon-hole novels, see a clear distinction between historical fiction and fantasy … but author Hunter Taylor thinks they’re missing a vital point. In her book , ancient history is where fact and fancy meet on equal terms. Hunter’s firm belief is that the supernatural must be accepted as an integral part of early medieval life to accurately recreate the times of which she writes and the mindset of those who populated the forests, villages and towns of a bygone era. Before the line between reality and myth had been drawn, war raged between the new religion and the old -- and she calls on her own rich heritage as well as painstaking historical research to bring to life times of bloodstained reality and magical legend in her remarkable debut novel, Insatiate Archer . Hunter’s family heritage is rich in ages old Celtic and Native American tradition and a store of folklore and inti
1 comment
Read more

March 18, 2010
Author, editor and publisher, Shells Walter has been published in places that include Micro Horror , Static Movement , The Shine Journal and Demon Minds . She is also actively involved with Sonar4 Publications , a science fiction and horror publishing house she started in 2008. In this interview, Shells Walter talks about her writing: When did you start writing? I started writing when I was 11 years old reading my first horror story by Edgar Allan Poe . Poetry is where I started first, then short stories and eventually longer works. I chose to start wanting to get published in 2006. Up until then I wrote for the pleasure of it. How would you describe the writing you are doing now? Different and twisty. I end up writing a lot of what I'm feeling at the time into my writing, of course what I find interesting or researched I put into it as well. I don't have a target audience per se . Several people who like different genres have enjoyed some of my work. I think I ten
Post a Comment
Read more

March 14, 2010
My short story, "Danfo Driver" has been accepted for publication in Writing Free , an anthology of contemporary Zimbabwean writing. The anthology is published by Weaver Press and will be out soon. -  Ambrose Musiyiwa, 7 April 2011. Possibly related books: , , Related article: The Bracelet [Short Story], by Ambrose Musiyiwa, Conversations with Writers , February 17, 2010
Post a Comment
Read more

Ghosts, a haunting and an exorcism By Alexander James Author Joe Bright ’s newly published novel is about murder. But the fiction has lain to rest the ghost of a brutal, real life killing that had haunted him all his adult life. Joe was still a high school teenager when the quiet town where he lived was rocked after the body of a missing schoolgirl was discovered in a pond near the railway tracks. She had been raped and strangled to death. The killer later turned out to be an intimate friend of Joe’s family. The whole town was in shock. But I was more deeply affected than most. The young killer was my brother’s best friend. I’d often laughed and joked with him around the Sunday dinner table and had gone out shooting rifles with him. One day soon after the murder, while police were still hunting for clues, this good pal passed me in his truck when I was on the way back from a run along the same road where the body had been found. He gave me an odd look, as though he was worrie
2 comments
Read more
More posts