Showing posts from October, 2018
Show all 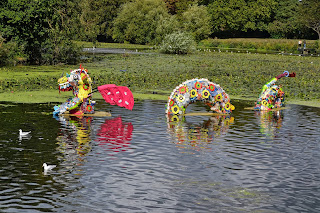 River Monster of Leicester Superheroes of Leicester encourages people to imagine Leicester as home to a cast of superheroes. Cities around the world that are similarly home to superheroes include Lagos, which is home to crimefighter, Abolaji Coker; Tokyo, Japan, which is home to the Super Young Team and Big Science Action; and, Boston, Massachusetts, which is the former home base of Wonder Woman, and the occasional residence of Aquaman and his wife Mera. (Massachusetts is also interesting because there's a place called Leicester in Massachusetts as well.) Leicester, England where the Superheroes of Leicester will be from currently has two known monsters: the Dragon of Habitat Loss, which we first heard about at the St George's Festival Fringe that was held in the city in April 2018, and the River Monster which was discovered in the city in August 2018. Superheroes of Leicester, the project will facilitate or bring out a graphic novel or comic book or series of such
Post a Comment
Read more
More posts