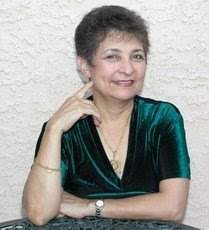 Gabriela Folgar de Shea was born in El Progreso Guastatoya, a small town in Guatemala. When she was 26 years old, she moved to Canada and settled in the city of Edmonton, Alberta.

Her first book, Angels Along My Path Of Thorns (Trafford Publishing, 2007), came second place in the best biography category in the 2008 International Latino Book Awards.

In this email interview, Gabriela Shea talks about her writing.

Definitely, my husband. He knew about my story soon after we met, and for over a period of twenty-five years he every-so-often would mention that this is a great story that has to be written.

Everything in my book is related to my personal experiences.

I decided that it was best to be direct and write in the first person. I also decided to dispense with pseudonyms and to use the correct names of all of the personalities in the book.

I started in July 2004. My husband had convinced me that my story would interest many people.

We started with a lot of research about the different options available in the publishing business and decided to use a POD (publish-on-demand) service for various reasons: First, to save time and energy, for we both hold down full-time jobs, leaving not too much time to write query letters and to search for agents; second, we live in a remote area as far as the literature scene is concerned and did not have connections that could advocate and connect us with a mainline publisher (in Canada, the popular press mostly resides in Toronto, more than three thousand kilometres from Edmonton); and third, we had to consider our ages, for we felt that we did not have time to wait years for answers to query letters and manuscript submissions, which we had heard quite often happens for new authors.

I did not focus on a particular target audience and judging from the content of the e-mails I have received, my book has been read by people from many different walks of life. At this precise time I am translating the book into Spanish for the Latin American market.

I find it very hard with my full time job to be consistent with taking the time and do some writing everyday. However, during the weekends I try to make up for lost time, trying to balance my weekend time with other commitments such as family and friends.

Angels Along My Path of Thorns is my first book.

My story takes place in Guatemala, Central America and describes the events of my childhood; the finding of my first love; the happy times while attending college; the suffering; the horrible events that happened to me when I was fifteen years old; the meeting of the angels who saved and guided me; and finally, my return to normal life with a career, and a wedding to the father of my two sons.

The story is written in a style with lots of dialogue.

It took me over three years to write the book and to have it edited. However, during those three years much research was being done: the maps were drawn, many of the photographs were taken, the design for the cover was made, and the interior design of the book was accomplished.

My book was published in May 2007 by Trafford Publishing. My husband and I decided to do go with the self-publishing idea after reading about the struggles and disappointments of many writers who had tried to get published through mainline publishing companies.

The advantages we have with the POD method is that we own the rights to the book and we got the book out on the market.

The disadvantage is that a self-published book does not get the same media attention as do the books published by mainline publishing companies; in fact, it is nearly impossible to be reviewed in the book sections of the established press. We think, this is sad, for the quality of writing and story are not taken into consideration and the world of literature is poorer as a result.

It is also very difficult to have one's self-published book placed in bookstores, mainly because one cannot meet the return policies that have become traditional in the publishing world. But thankfully, the advent of the Internet book stores and Internet publicity sites have dramatically changed the book industry and have allowed authors to choose a different route. The consumer is now better off too, because he has direct access to to all available books.
.
Which aspects of the work you put into the book did you find most difficult?

Having to put into words the negative aspect/actions of my family and going back to relive the tragic events of my ordeal.

In relation to my family, it was hard because we do not like to admit or to disclose that our family was dysfunctional.

In relation to the events of my ordeal at the age of fifteen, that was very difficult to describe because the actions committed against me were horrible, barbaric, and traumatic.

To reminisce about the good times of my adolescence when I attended college and where I met my first love. It was a happy time.

It has made the relationship with my husband and children much stronger.

I have received much feedback from readers about how my story has made an impact in their lives. When I hear this, I feel that the time and effort have all been worthwhile.

I have not found a real big challenge. However, trying to find the best ways to sell and promote my book is time consuming, but I have not let that become an overwhelming challenge. My husband and I are finding ways to deal with it.

This interview was first published on OhmyNews International.

"Gabriela Shea: About Angels Along My Path of Thorns and Her Experience", AllTheseBooks.com, April 23, 2008.

Ana Folgar said…
Gabriela, I had been reading about your book, and is a big honor that the name of our country is to high thanks to you. I am from Guatemala too and is more interesting that we share the same Last Name! I am a Folgar around the world too, reason why will be glad to contact to you and try to see about our family lines... (Mi grandfather was born in Jutiapa and some relatives actually live in El Progreso). Mi email is analuisafolgar@hotmail.com Blessings, best regards, Ana Folgar.
November 29, 2008 at 3:29:00 PM GMT

Anonymous said…
I would love to read your book. I believe every in migrant to this country has a story to tell . I smile one of many , it would be interesting yo have a collection of stories written. I in migrate to Canada 37 years ago, also finally meeting a man who a consider a gif from heaven, graduated with a teaching degree in Edmonton, but still faced many challenges . Congratulations Gabriella. I have some suggestions of other wats you can promote your book.
I will contact you via Facebook to give you my email so that if you wish you can contact me.
November 1, 2014 at 8:47:00 AM GMT