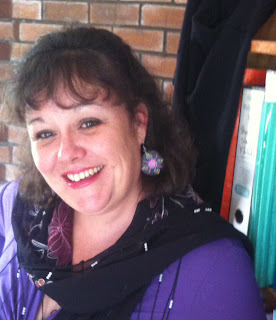 She was shortlisted for the 2011 Caine Prize for African Writing and has won awards that include the PanAfrican prize for children’s literature, The Golden Baobab Prize and the Orange/Botswerere Botswana Artists Award.

Her books include the collection of short stories, In the Spirit of McPhineas Lata and Other Stories (HopeRoad, 2011); and the novels, Signed, Hopelessly in Love (August 2011) Tafelberg, 2011) and Mr Not Quite Good Enough (Sapphire Press, 2011).

In this interview, Lauri Kubuitsile talks about her concerns as a writer:

I started writing 8 years ago, just when I was turning 40.

I actually became a published author almost by accident. My books in my Kate Gomolemo Mystery Series were actually all first published in a small newspaper I owned in Botswana. We were changing format and wanted to see what we could do to maintain our readership. I decided I would write a serialised novel, 1,000 words each issue.

When the first book finished in the newspaper, people called the office asking for parts they had missed. On a whim I sent the manuscript to Macmillan hoping that they might publish the book so that our newspaper readers could get the parts they’d missed. Macmillan agreed, and that was my first published book. It was published in 2005.

I have four published romances with the South African publisher Sapphire Press, an imprint of Kwela Books. I also have two detective series. I write for children and teens as well. And I write short stories, and occasionally, literary stories.

To be honest I write for myself, my hope is that other people will enjoy my stories too.

I have many influences. I love J. D. Robb, John Steinbeck, Margaret Atwood, Kate Atkinson… actually it’s difficult to mention all of them.

I do find that certain writers, though they may not come out explicitly in my work, they inspire me to write. For example, Steinbeck. I go back to his work often for inspiration. His simple solid sentences resonate with me and my hope is to someday be able to move a story along in such an honest way.

I think there is hardly a story I have written that does not start with a personal experience. It might be something in my own life, something I witnessed, or something I heard.

Well, I’m a full time writer living in Botswana, the toughest thing for me is to try to make a liveable income from my work. It is a constant challenge. I try different things, I try to keep abreast of what is happening in the industry. For example, I recently published three of my Kate Gomolemo Mysteries on Amazon. Two have been published traditionally before but I kept the ebook rights. I don’t know anything about self publishing but I’m learning. I just try to be adaptable.

I’m a full time writer and I treat my writing as my work. I usually get to my office (which is separate from my house) at about ten. I attend to administrative work first and then get to work on whatever my day’s project is. I usually knock off about 6:30.

How many books have you written so far?
What is different about your latest books?

My latest books are the self published ebooks: Murder for Profit; Anything for Money and Claws of a Killer.

The series is set in Botswana and the books are fast paced mysteries. If you love mysteries, you’ll love these books! I know as a reader I’ve always loved series because you can follow the protagonist for some time, in different places. These books are like that. Kate’s life will change quite a bit from the first book to the last. I’ve received great feedback on the books. The first book in the series, The Fatal Payout, is currently read in all junior secondary schools in Botswana and I meet people everywhere who love the book.

Murder for Profit; Anything for Money and Claws of a Killer were self published at Amazon, Kindle Direct Publishing (KDP), my first attempt at self publishing.

I wanted to try KDP and I was lucky to still have the e-rights for these three books.

What advantages and/or disadvantages has this presented?

The advantages are that you have complete control over the books - the covers, the design, the marketing. That’s also sort of the disadvantage too. You really need to put time into marketing. There are so many books published at KDP so you need to work hard to get some attention for your books.

My hope was if I published all three of them at the same time I might build a readership a bit quicker. I’m currently on a very steep learning curve.

Which aspects of the work you put into the books did you find most difficult?

The marketing is tough. Especially trying to get people to read the books and do reviews, and then to put the reviews up at Amazon. It takes a lot of time. Much more than I anticipated.

I love starting a book. I work out the plot and character bibles by hand before I start writing, I like that part.

I also like writing the rough draft. I write very quickly/ I can write up to 8,000 words in a day at that stage.

I’ve just finished the rough draft for a new romance. It’s called There’s Something About Him. I hope to have it to the publisher in the next two months or so.

I’ve won or been shortlisted for quite a few writing prizes. I’ve twice won the PanAfrican prize for children’s story, The Golden Baobab Prize. I won our national award for creative writers sponsored by our Ministry of Youth Sports and Culture, the Orange/Botswerere Prize, and last year (2011) I was shortlisted for the Caine Prize which is perhaps the most prestigious prize for African short story writers.