Showing posts from July, 2010
Show all

The Warrior Bard By Alexander James Azam Gill is a writer and a warrior. And his thrillers are based on first-hand experience of front line fighting, covert commando operations, under-cover intelligence work … and on a seemingly incongruous lifetime’s love-story with literature, study and teaching. Now a French citizen, Gill was born in Pakistan, the son of a renowned jurist father and a talented playwright mother. He is fluent in several languages, but it is in English that he writes his novels. He was educated in English schools and colleges run by British and Americans and he gained his BA from Forman Christian College of the Punjab University in English literature and Political Science. Accepted as a ‘gentleman cadet’ at the Pakistan Military Academy, he passed out among the top 10% of his graduation year and was commissioned to a light infantry battalion of the Punjab Regiment in Kashmir. He also won his paratrooper’s wings. In Kashmir, one of the world’s flash-points, Gill
Post a Comment
Read more 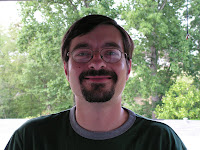 North Carolina resident, Eric S. Brown writes horror short stories and novels. His work has been featured in a number of anthologies, among them, Dead Worlds I , II , III , and V ; The Blackest Death I and II ; The Undead I and II ; Dead History (Permuted Press, 2007) as well as Zombology I and II . His books include Space Stations and Graveyards (Double Dragon, 2003); Madmen’s Dreams (Permuted Press, 2005); Zombies: Inhuman (Naked Snake Books, 2007) and Tandem of Terror (Library of Horror, 2010). Brown is also part of the collaborative zombie novel effort from Pill Hill Press , Undead, Kansas and contributes an ongoing column on the world of comic books for Abandoned Towers magazine. In this interview, Eric S. Brown talks about his writing: When did you start writing? I started writing when I was just a little kid. Even when I was tiny, I loved horror. The first thing I remember doing is a rewrite of Halloween 3 because I couldn't live with the fact that
Post a Comment
Read more South African commercial photographer and a writer, Danie Nel has some poems that have been featured in the poetry anthology, The Colors of Life (Watermark Press, 2003). Currently he is working on Notsoreallifestory , a blog novel he describes as "a take on the alter ego interaction storyline, but with a different slant and angle on it." In this interview, Danie Nel talks about his writing: When did you start writing? I realized I enjoy writing in primary school as part of our creative writing assignments and, having been an avid reader since I could read, I suppose that has always fuelled the fires of creativity for me. I’ve been writing songs, and lyrics, since I was 18, and have penned a few poems. However, working as a professional photographer has put me in contact with writers, journalists and novelists, and their enthusiasm for their craft has rubbed off on me. Only my poems have been published in a collection of works called The Colors of Life , and was incl
Post a Comment
Read more

July 05, 2010
Andrew Taylor has written and published eight poetry collections, among them, Turn For Home (The Brodie Press, 2003); Temporary Residence (erbacce Press, 2007) and The Sound of Light Aircraft (Knives, Forks and Spoons Press, 2010). He has a PhD in Poetry and Poetics and is a founder member of the Edge Hill University Poetry and Poetics Research Group . In addition to that, Taylor also co-edits erbacce and erbacce-press . In this interview, Andrew Taylor talks about his writing: How would you describe the writing you are doing? Poetry. Some have describe it as innovative, some realist, some post-realist. I think it’s for others to describe it though rather than me. Who is your target audience? Whoever is publishing the poems I guess. I never have thought of a target audience really. I just hope that those who buy the books do so for the purposes of enjoying the poems and in supporting the small presses who kindly publish the work. How have your personal experiences infl
Post a Comment
Read more
More posts