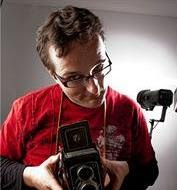 South African commercial photographer and a writer, Danie Nel has some poems that have been featured in the poetry anthology, The Colors of Life (Watermark Press, 2003).

Currently he is working on Notsoreallifestory, a blog novel he describes as "a take on the alter ego interaction storyline, but with a different slant and angle on it."

In this interview, Danie Nel talks about his writing:

I realized I enjoy writing in primary school as part of our creative writing assignments and, having been an avid reader since I could read, I suppose that has always fuelled the fires of creativity for me.

I’ve been writing songs, and lyrics, since I was 18, and have penned a few poems. However, working as a professional photographer has put me in contact with writers, journalists and novelists, and their enthusiasm for their craft has rubbed off on me.

Only my poems have been published in a collection of works called The Colors of Life, and was included after I entered a competition.

As for my creative writing, I only recently really started writing again, and decided that the blog-model works for me, and I’d rather earn my money through advertising programs, and focus on writing what I want, how I want to, and when I want to, without publisher’s demands. I also use the comments section to get readers to interact with me, and rather have the end-user influence my writing, and not the money man!

Free, quirky, strong storyline, suspense and humour is a must. It would probably fall into the category of humorous drama.

Anyone with a sense of irony, who loves reading easily and loves to chuckle at life. I’m like that.

Michael Cunningham is just poetic and has the most beautiful writing style.

Bryce Courtenay for sheer story. Koos A Kombuis for his humour, descriptive ability and flow. Bill Bryson, for knowing how to communicate the oddities that we all notice, just don’t seem to remember.

Probably. We can only put out versions of information we ourselves have gathered and processed.

That I will bore the reader with obvious plots, obvious humour and no surprises. I try and surprise myself.

I write weekly. I normally write late at night, after the family’s gone to bed. It ends when I fall asleep!

I’m writing a story called Notsoreallifestory, in the blog format. It’s about a man who wakes up to a voice in his head one day. It’s a take on the alter ego interaction storyline, but with a different slant and angle on it.

Which aspects of the work do you find most difficult?

Dialogue is a spontaneous process, and recreating proper and good dialogue is difficult.

I repeat the dialogue aloud to myself, and if it seems fake, or makes me cringe, I change it.

Which do you enjoy most?

When writing flows, and I re-read my efforts, it’s amazing to see that I’ve opened up doors in my imagination that I haven’t noticed before. Or I realize I think differently about things than I thought I do.

What sets Notsoreallifestory apart from other things you've written?

I’ve never attempted a series blog before, and all my pieces have been short, concise and normally limited to a couple of pages.

In what way is Notsoreallifestory similar to the other things you've written?

My sense of irony is deeply embedded in how I communicate, also, I veer from cliché’s.

What will your next piece of writing be about?

Probably a musician. Not sure what he’s going to do yet. I just love music and would like to explore that possibility.