Showing posts from January, 2009
Show all

Ivor W. Hartmann is a Zimbabwean writer, visual artist and literary activist. He is also editor-in-chief of StoryTime , an ezine that seeks to showcase new African writing. In this email interview, Hartmann talks about the ezine and about how it is being received by emerging African writers. What is StoryTime all about? To quote the StoryTime About page mission statement if I may, since I put the effort into re-writing it recently: The StoryTime African New Fiction FreEzine is all about new African fiction reading and writing. For our readers we provide a free weekly ezine showcasing the works of some of the hottest new African fiction writers. For our writers we endeavour to find them, and then encourage free online fiction publication at ST, as a multi-purpose means to improve writing ability and their exposure. For the ST readers, my aim is to publish at least one great fiction story every week from an African writer, usually early morning Sunday (+2GMT). I also do the occ
Post a Comment
Read more

January 07, 2009
Lucien Black currently resides in Orange County, Ca with his wife and children. He started writing in 1991 and helped to produce an independently published comic book. His own first book, No Vacancies, Vol. 1 started off as a series of comic book scripts. Currently, he is working on the second volume of No Vacancies . In this email interview, Lucien Black talks about his concerns as a writer. When did you start writing? I started writing in 1990. I had no aspirations to be a writer at first, but after a writing course in high school I started to enjoy the idea. My teacher at the time, Terry Fugate, was a great influence and after I graduated I started composing scripts for comic books. I joined up with a few friends and about two years later we published our first independent comic book. We were very excited but our investor backed out at the last minute and left us to fend for ourselves. We were able to get book one printed, but subsequent issues were shelved. I eventual
3 comments
Read more

January 05, 2009
Sarudzayi Barnes was born in Zimbabwe and was a student at Domboramavara Primary School before going on to Monte Cassino Mission and Harare High School. She is currently studying Law with the University of London. She runs a publishing company, The Lion Press Ltd , which specialises in African and Afro-Caribbean children's stories in particular and other African and Afro-Caribbean literature genres in general. She also distributes and promotes books written in African languages. Her books include The Endless Trail (Author House, 2008) and The Village Story-Teller: Zimbabwean Folktales (The Lion Press Ltd, 2008). In this interview, Sarudzayi Barnes talks about her concerns as a writer. When did you start writing? I started writing when I was doing Lower 6 at Harare High School in 1990. I participated into a short story writing competition which was facilitated by the Curriculum Development Unit, which was based at the University of Zimbabwe, I think, but I am not sure.
1 comment
Read more 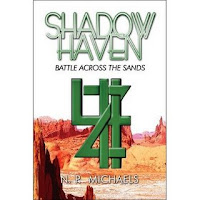 N. P. Michaels was born and raised in Michigan. He made his debut as an author with the release of Shadow Haven: Battle Across The Sands (PublishAmerica, 2008). In this slightly edited email interview, he talks about his concerns as a writer: When did you start writing? I started writing in 1999, though I didn't become serious until 2005. In 2005 I was writing a story which is the pre-story to Shadow Haven . At the time it wasn't though. Other stories began to sprout during this time and then my mother fell ill of cancer. It was her that pushed me to believe I could be a published writer and during the years that followed, I re-designed the story to the current one. I started by getting the 'main story' down and plotting it through each book. Other major and minor stories would come as I continuously re-wrote the story. As soon as my first book was complete I sought a publisher. How would you describe the writing you are doing? An adventure for sure, bu
Post a Comment
Read more
More posts