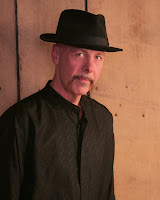 He studied journalism at SUNY New Paltz and graduated with a BA in Communication Arts.

An extract from his first novel, In the Midst Of (New Age World Publishing, 2008) is available on the Leicester Review of Books.

I wrote my first short story while in grade school. It wasn't until high school -- by way of two especially inspiring educators that I began to write on a regular basis. In my senior year I became active with the student newspaper, initially as photographer, however my interest quickly shifted to writing.

I continued my interest in journalism through college, majoring in Communication Arts. After graduation I was employed as sports editor for a small-city newspaper.

I think the newspaper experience fueled my eagerness to be in print. I don't see it as ego-gratification; it's a matter of completeness. In the same sense as music requires performance -- stories need to be told.

What did you do to achieve this end?

Writing my novel was a four-year project. Once it was complete, I sampled a handful of trusted readers who assured me that my manuscript was worthy of publication. At that point I sought publishers that accepted unsolicited manuscripts. Three publishers were afforded a look at it. The third publisher agreed to publish.

Primarily -- I took my 520 page first draft and mercilessly excised every unnecessary word. The final draft weighed in at 359 pages. One, essential skill-set I possess comes from having been an editor. Being able to distance oneself from one's writing and accede to the reader's perspective is invaluable. To the best of my knowledge the publisher's editor altered two sentences in my manuscript.

I categorize my writing as "literary fiction". My disposition toward imaginative plot elements and devices that interrupt chronology and employ motifs both mythical and literary seem to confirm my placement.

I don't know as I differentiate my audience. I recognize that my novel is not going to appeal to everyone. On the same note, I refuse to condescend to readers in general. I do not talk down to children, and I certainly wouldn't talk down to an adult.

One reader commented that they kept a dictionary on-hand when they read my work. It wasn't a criticism, and the vocabulary did not impede finishing the book. I do not aim to inflate my writing with "big words" nor do I intend to restrict myself to a sixth grade vocabulary.

Richard Brautigan is undoubtedly my greatest influence. His ability to encapsulate a complex idea in a simple manner -- especially his tendency to do so in a surprising manner never fails to impress me.

Brautigan was a poet, story-teller and novelist. He moved transparently between mediums because he could transform a mundane event into a literary event without appearing the charlatan.

I am a very tolerant individual. I revel in meeting new people who confirm that variety is indeed the spice of life. That lends a certain latitude to my writing -- I can like my heroes and demons, alike.

My ability to embrace human strength and weakness abets my ability to project multidimensional characters that stand above the stereotyped good-guy/bad-guy shallowness.

Experience also feeds my imagination and lends the potential for a richness in painting my storyboards.

I think the easiest part of writing is theme development. The labor begins as characters become animated. The writer must not only keep the characters vital, distinct and maturing -- they must be challenged and in turn challenge the reader while exemplifying the theme. A tricky business that I am still perfecting.

I think the greatest challenge is keeping "me" out of my stories. I have no desire to proselytize and my books are not autobiographical.

Sometimes I simply manufacture a character that is diametrically opposite of myself. Most often I maintain a pure personality for my characters. In my mind I can see them, recognize their voices and predict their behavior based on "their" values -- not "my" values.

I write everyday. It is often not a manuscript. I contribute to numerous blogs, websites and letters columns, etc.

Currently I have one title in print: In the Midst Of (New Age World Publishing, 2008).

What is the book about?

In the Midst Of is a coming of age piece. It is written in retrospective: a middle-aged man focusing on a lost friend from his college days.

The setting is the 1970s. The themes involve friendship, bonding, balance in lopsided relationships. The book features numerous literary, musical and cultural allusions.

The difficulty was presenting the narrator, Brian -- his backward glance is dominated by a more powerful personality, Hollis.

Hollis is influential, especially upon Brian who is impressionable.

Since Hollis only exists in the past, it is Brian who must grow from the experience of revisiting the past. Modifying his feelings vis-a-vis Hollis requires modulation of devotion that corrodes with time and scrutiny.

How did you deal with this?

It was particularly difficult because not all of the novel is chronologically presented. Individual scenes required a sophisticated timing that I tinkered with throughout.

Which aspects did you enjoy most?

Writing dialogue did not come easily to me. Once I could "hear" my characters voices, that all changed. I had to tell some of them to shut up!

It is the largest, fictional piece I've written.

It reflects the same leanness that is my signature.

I'm toying with a thriller.

Overcoming the inertia -- the writer's hymen is an idea that one hasn't the ____ (fill in the blank) to complete a lengthy work. Once that myth is dispensed with, it's like a sailor with only red skies at night.

This article has also been featured on OhmyNews International.