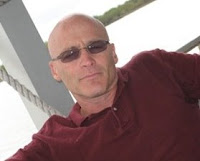 Brett L. Abrams was born in Newark and South Brunswick, NJ. He lived in Wisconsin, Philadelphia, and Boston before settling in Washington, DC where he earned a doctorate in U.S. History.

His interest in gender, sexuality and culture in the media of the late nineteenth and early twentieth centuries led to the publication of his first book, Hollywood Bohemians: Transgressive Sexuality and the Selling of the Movieland Dream.

His second book, Capital Sporting Grounds: A History of Stadium and Ballpark Construction in Washington, DC focused on the rationale and controversy surrounding the construction of stadiums in Washington.

In this interview, Brett L. Abrams talks about his writing.

One challenge involves needing to be an acrobat. I want to strike a balance between including stories that are amusing and entertaining with analysis that shows links between where the culture was and where it is today.

Then there’s the challenge of creating a public presence for the book. How does an author find a niche for his book let alone reach a large number of the history reading public?

Yes, but I’m not at all scheduled about writing. I tote my notes, pad and pens around and take them out when I feel inspired. I shut down as quickly as I start up.

Hollywood Bohemians: Transgressive Sexuality and the Selling of the Movieland Dream (McFarland, 2008) describes images of gay, lesbians and adulterers who appeared in Hollywood promos to titillate audiences and promote the location as unique during the 1920s and 1930s.

Capital Sporting Grounds: A History of Stadium and Ballpark Construction in Washington, DC (McFarland, Jan 2009). Economic development as a rationale for building a stadium is only a recent phenomenon. Stadium advocates have used a variety of reasoning for needing new stadiums -- from bringing the Olympic Games to Washington to memorializing Thomas Jefferson. The book captures those efforts and the wild political atmospheres in which they occurred.

How different are the two books from each other?

Unlike the first book which focused on images that appeared in publications, Capital Sporting Grounds contains plans that never materialized.

The book is a cultural history that features people and businesses who promoted images and plans in an attempt to shape the development of their city.

In what way are they similar?

The efforts of the studios to give Hollywood a wild image and of politicians to make Washington a sports city both aimed to garner attention for the city and broaden the city’s appeal to tourists.

I struggle with writing as clearly as I would like to. I edit my own work three or four times.

It was through journalism.

I started a school newspaper in junior high and then later on wrote about our student hockey league for the local paper. I completed a journalism degree but soon found the field was not for me. I worked in business and then decided that I could resume writing by getting an advanced degree in history.

After getting my doctorate, I wrote articles for journals and newspapers on a variety of subjects, ranging from labor strife to the late Jerry Falwell’s labeling of Teletubby Twinky Winky. I turned my dissertation into a book for a broader audience. Then I wrote a book sparked by the controversy over spending taxpayer money to build a baseball stadium where I live in Washington, DC.

I write history for the reading public. The stories are usually sparked by current events. I try to look for an angle that hasn’t been covered and see if the documents exist to support my perspective.

There is a large reading public interested in history. Many of these readers seek to connect life today with the past. I hope to contribute to the great US intellectual tradition that began during the mid-twentieth century, providing background and context for events of the day.

I want an active and informed citizenry shaping our world. Historical articles help frame issues that are raging today for the body politic. These stories also help readers see the development of current perspectives as well as the alternatives that might have been or could be.

In the writing you are doing, who influenced you most?

I enjoy Tom Wolfe’s ability to exhibit real life personalities within an equally vibrant yet informative context. The Electric Kool Aid Acid Test told me so much about the Grateful Dead and the hippie movement in a very memorable way.

I write history because I love learning about people and their actions. I’m gay, which sparked my interest in examining the gay and lesbian imagery I describe in Hollywood Bohemians.

I am researching the descriptions of Washington, DC as a travel location over its two centuries of existence. The book will show both perceptions of the US capitol and changes in the development of the travel industry.

I enjoy researching through source materials because I am a ferret who loves to dig into things. The more digging I do, the greater the chance for uncovering a gem that can become the centerpiece of a chapter.

I enable readers to learn about things they take for granted and hopefully inspire them to be more inquisitive.