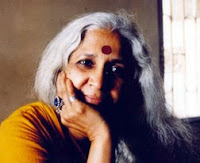 Her work has also been featured in anthologies that include City Stories (Scholastic India, 2007); Growing Up as a Woman Writer (Sahitya Academy, 2007); and India’s Jewish Heritage, Ritual, Art and Life Cycle (Marg Publications, 2003).

In this interview, Esther David talks about her writing:

I grew up in our family house in the old walled city of Ahmedabad, where we had a beautiful library with leather bound books and I spent all my spare time reading whenever possible. At sixteen, I went to art school at the Faculty of Fine Arts at Vadodara, where I started writing. I realized that I could write. But I became a sculptor and could not change my profession as I soon married and divorced and was a single mother of two children, so I taught sculpture and art history in an art school in Ahmedabad.

In 1979, I became an art critic for The Times of India, Ahmedabad edition. Soon, I started writing for myself and at the age of 46 I wrote my first novel, The Walled City. I felt, it was a miracle that it was published and I became a full time writer as other books followed.

It is a sort of writing or literature, which has emerged from conflict of being Jewish in India.

My parents were not religious, so I did not have religious education, but at the age of 46, I felt the need of knowing Judaism and as a form of research for my novel Book of Esther, I took regular education from the cantor, Johny Pingle of the Magen Abhraham Synagogue in Ahmedabad. Later, I came to know his wife, Julie -- through her, I discovered traditional Jewish cuisine. I mingled with the Jewish community and made notes of their life styles. I am still not religious and uncomfortable during religious functions, but I like to observe and study the Jewish community of India.

I would say, I understand myself and my religion better, through my novels.

My audience is the world, which is still ignorant about the existence of Indian Jews.

I was motivated to write as I was confused about my own cross cultural conflict of being Jewish.

My own cross-cultural conflicts and minute observations of the Jewish community in India has influenced my writing as seen with the belief of Prophet Elijah, so much so that now even I have a connection with the prophet. He appears to listen to me!

Preserving the Jewish tradition, rituals and artefacts in India, the preservation of the heritage of architecture, oral traditions and cuisine, I also study the fast changing lifestyles in a micro-miniscule community and try to work out these problems, through my writings.

I find myself most comfortable while writing about Jewish subjects and that is my challenge. I solve this by mingling and mixing with the people of my community and listening to their problems, beliefs and stories.

I make a general form, before I start a novel, but do not do any detailing. I start work at 3 p.m. I write my newspaper column in the morning. I have lunch and start work and go on up to midnight if possible with a tea break at 5 p.m.

Writing takes form on its own, when I switch on my computer, it is a secret, about which I myself do not know how it happens, but it happens.

My career as an author started in 1997 when my first book, The Walled City, was published by East West Books, Madras. Till then I had been a sculptor, an art critic for leading English dailies and a professor of the history of art. The Walled City, which has so far been translated into French and Gujarati, brought in much of the imagery that I had practiced as a visual artist and received critical acclaim. This was the story of three generations of Bene Israel Jewish women living in the city of Ahmedabad, India.

The book was translated into French by Sonia Terangle titled La Ville en ses Murs, and published by Editions Philippe Picquier. The French version was also short listed for the Premier Liste de Prix Femina in France. In Gujarati, it was translated by Renuka Sheth.

In the USA, the novel has been republished by Syracuse University Press in 2002. The Walled City is going to be republished with Westland Books in 2009.

Book of Esther is taught in the course of Gender and Literature Post-colonial South Asia and beyond, at department of English, George Washington University, USA.

All novels are researched by Shalva Weil for her chapter,” The author who grew up with a tiger” for her book, Israeli Scholarship in India, co-authored with David Schulman, Jerusalem University, Israel.

I also contributed "The Worry Box and the Laughing Lady", a short story for the anthology, City Stories, published by Scholastic India. [The] commemorative volumes by Penguin India for 20 years in publishing, [feature an] extract from Book of Esther. [In addition to this, I have also been] published in Jasbir Jains anthology, Growing Up as a Woman Writer for Sahitya Academy New Delhi, with my story "Nanki Chirai" in 2008.

[Other books I have written include] Book Of Esther [which] explores Jewish family life in India and is loosely based around my own family; India's Jewish Heritage, Ritual, Art and Life Cycle -- I was on the team of writers of the book edited by Shalva Weil for Marg Publications, Mumbai, January 2003; Book of Rachel (Penguin Viking, 2006; Penguin Global, 2007) translated into French (La Livre de Rachel, Editions Heloise d’Ormesson, 2009) by Sonja Terangle; My Father's Zoo (Rupa, 2006); Shalom India Housing Society (Women Unlimited, 2007; Feminist Press, 2009).

Man with Enormous Wings took me 7 years. It will be published sometime in 2009 or 2010 by Penguin Viking. It is about the riots of 2002 in Ahmedabad.

It was hard and needed research, so my research assistant Namrata Dwivedi helped me.

Which aspects of your work did you enjoy most?

My first novel The Walled City, because it had an element of mystery as I did not know if I would make it as a writer, so, it is my most precious book.

It was an abstract book and written as I felt at that moment, confused and in conflict of being a Jew in India.

It is different from my other books as it was written without research.

That my novels speak to my readers ...