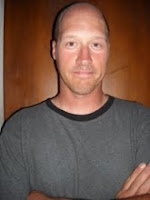 His short stories have been featured in a number of print and online magazines, among them, Blood Moon Rising, Necrotic Tissue, MicroHorror and Sand: A Journal Of Strange Tales.

In this interview, Brick Marlin talks about his concerns as a writer:

I started writing at a very young age, back when I was in sixth grade. It was a few days before Halloween and our teacher gave us an assignment to make up a scary story. Most of the kids in class wrote about ghosts, pumpkins with smiling faces, and Frankenstein-like monsters, but I wrote one up about a serial killer murdering children for fun. (Yeah, I know, I'm a little disturbed) And, if I'm not mistaken, my teacher had a long talk with my parents afterward.

When did you decide wanted to get published?

A few years ago. Being published, I think, is a great achievement in itself. It takes a lot of hard work to not only come up with creative tales that will be of interest to an editor, but to make sure that your grammar and spelling is written well.

I started sending in short stories back in 2001, and was really not serious with it until 2006 arrived. Mainly, [I was] just happy to have a tale published.

Mostly dark fiction. I used to say I wrote in the horror genre, but I mix sci-fi and fantasy into my work.

Lately, I have been writing for a wider audience, not only for adults, but for the kids too.

What motivated you to start writing for this audience?

I would have to say Ray Bradbury, one of my all time favorite writers.

Ray Bradbury, Stephen King, Clive Barker, Neil Gaiman and Terry Pratchett [because of] multiple reasons. Their creativity, their great writing, the chill along the spine, and what lies beyond the imagination.

I would say how people react to others. Some are nice and pleasant to talk with; while others still haven't grasped the fact to treat people as they would like to be treated.

To write the very best that I can and hope that my readers enjoy my work. Right now I've collected a small group of fans in tow and I do hope that it'll becomes larger during time.

How do you deal with these concerns?

Read and write as much as I can. I think that is the key.

Writers block. It's rather odd, but sometimes ideas are fed to me one after the other; while sometimes I think the writing demons have a sick sense of humor, making me starve for words.

I try and cough up about a minimum of a thousand words five days a week in between working 40 hours a week and, now, returning to playing music; though sometimes it doesn't work out that way, such as having the dreaded disease of writer's block.

I've written about eight. I have three published and two forthcoming.

Here's a list:
The Darkened Image, Saturated and Crimson, and Dark Places of Rest are all part of a series. It's my idea of an apocalyptic world where aliens have taken over the planet, murdering humans one by one, while keeping a small group around to enslave them to build a new alien world on the planet. Later, the humans form a Rebellion and begin sending warriors back in time to eliminate serial killers. They believe that if they can rid their terrifying history, the world's population will be larger before the arrival of the aliens, larger to fight against their race. What they don't realize is that the aliens are onto their plans, sending their own race back in time, possessing humans, turning them into serial killers...

Raising Riley is about a boy who is thrown into an abusive world with his father and the bullies at school. Not to mention what lurks inside his closet...

An Ensanguined Path is about a werewolf hunter who hunts down the lycanthrope. At a very young age her parents were slaughtered by the beasts and now, as a member of the Krimson Alliance, she takes revenge on their race...

How long did it take you to write Dark Places of Rest?

In this book, I explain how the aliens possess the humans of the past. It took about three weeks to write, trying to research a few things to make sure that the facts would be clear.

Dark Places of Rest was published through Sonar 4 Publications, and I chose this publisher because I had already published a few short stories through the web zine as well as having the opportunity to collaborate with the editor and two other writers on a fun project.

And I think the editor has done exceptional work on promoting me.

Which were the most difficult aspects of the work that you put into Dark Places of Rest?

Originally the story called for me to research how to embalm a corpse, which I had to consult with a very good friend of mine who is a mortician. I was lucky he was around.

I loved the chill of the tale because some things that I write, then go back and re-read, gives me a bit of a scare.

What sets Dark Places of Rest apart from other things you've written?

Not really a whole lot. It still stays with the sci-fi genre.

Well, I've already written a few more to add to the list, still not published, but I think I may dive back into the world of my werewolf hunter.

I would have to say the enjoyment of hearing my small group of fans tell me how much they love my work.