June 03, 2010
A True Manifesto or Literati Hype?
By Jessica Cortez* 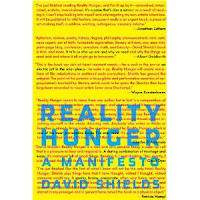 Essayist David Shields' latest book, Reality Hunger: A Manifesto was released earlier this year to both critical approval and a measured amount of hype.

Of course, Shields' book endeavored to fulfill a lofty goal — to identify the course of literature's future.

Shields is even so bold as to trace the path of Art's future as a whole. And what better way to go about accomplishing this than to self-proclaim the little volume a “manifesto”?

Shields begins his network of interrelated theories in an interesting way:

Every artistic movement from the beginning of time is an attempt to figure out a way to smuggle more of what the artist thinks is reality into the work of art.

He concludes his first chapter, “Overture,” in a similarly grandiose manner, which typifies the rest of the book, by proclaiming,

An artistic movement, albeit organic and as-yet-unstated one, is forming. What are its key components? A deliberate unartiness: 'raw' material, seemingly unprocessed, unfiltered, uncensored, and unprofessional ... Randomness, openness to accident and serendipity, spontaneity; artistic risk, emotional urgency and necessity, reader/viewer participation ...

And on and on.

What is most fascinating about Shields' book is not simply its content, but its form.

The book is essentially a compendium of quotes, varying in length, from the short aphorism to a solid grouping of paragraphs, interspersed with the author's own musings.

The real zinger is that Shields does not cite the quotes' authors in footnotes. He does so only in endnotes, so that there is no way that the reader knows who said what unless she flips to the back of the book.

And the breadth of the cited authors is dizzying: Picasso, Roland Barthes, and John Mellancamp to name a few. Even an excerpt from Scooter Libby's legal brief is presented.

So what is the thrust of Shields' proclamations? What is his point?

In a perfect fusion of manic style and engaging content, Shields essentially prophesies a conflation of fiction and nonfiction, to the point that the two (apparently false) categorizations will be indistinguishable.

Sound too lofty? A little ridiculous?

To a certain extent, yes.

But there are two things that lead me to believe Shields' book stakes some sort of valid claim on the truth.

For one, I see Shields' basic premise everywhere — in Pedro Gonzales-Rubio's recent, fairly groundbreaking film Alamar; in the blogosphere; in virtual reality worlds like Second Life; and, even in the as-of-now dubious art form of karaoke (something Shields' book discusses at length).

Secondly, Shields' knowledge of the Western literary canon is solid. He doesn't take his feet off the ground in this respect. He pays tribute to our literary predecessors by demonstrating what they have had to show us about their own respective time periods, and, moreover, what the more enduring works can teach us about the future of the novel.

In an age where it seems as though people are reading less and less, Shields' little book is certainly revolutionary. Or at the very least, it's a breath of fresh air.

*Jessica Cortez writes on the topics of online degree programs. She welcomes your email comments.