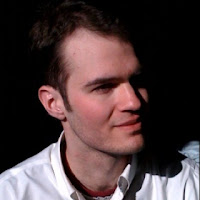 Max Gladstone lives, works, and writes in Cambridge, MA. He is the author of several novels which include Three Parts Dead, which is currently out on submission.

His short stories have been featured in magazines that include Space Westerns and On The Premises as well as in the anthology, The Book of Exodi (Eposic, 2009).

He also administers the blog Two Guys, Three Hundred Poems, where he publishes and comments on translations of the anthology of Tang poetry known as the 300 Tang Poems.

In this interview, Max Gladstone talked about his writing:

I began writing before I actually knew how to put letters together -- just a bunch of scratches filling my parents' old notebooks, one line at a time -- but if you mean writing stories, it started with a very simple vampire story typed out on an old suitcase Remington in my closet at the age of five or six.

From there, it was a short skip and a jump to wanting to be a published writer: I realized as soon as I started reading books that were worth remarking upon that I wanted to respond to the ladies and gentleman I had read, and the best way to do that was to write books of my own.

In terms of genre, I write mostly in what John Crowley would call the genres of romance: science fiction and fantasy, with a bit of mystery thrown in.

I'm concerned about the degree to which American fantasy fiction concerns itself with the same issues as English fantasy fiction. It seems to me that we should be trying to do something different, and I've been trying to reach towards that.

I've spent the last year or two reading a lot of American fiction and trying to develop the voice in my writing. It's a very strange exercise, something like practicing Taiji Quan, where you have to be very conscious of the words you're writing and what they mean.

I try to write for all intelligent people who like awesome stories.

Roger Zelazny has been an immense influence since I was a child, and a lot of my initial sense of the poetry in speculative fiction comes from him.

I also loved LeGuin's Earthsea books; her dragons are some of the best realized creatures (monsters? beasts? people?) in fantasy.

John Crowley's Little, Big has also molded the way I see fiction, though I didn't discover that particular masterpiece until college.

Recently, I've found non-genre authors the most moving and influential: Mikhail Bulgakov, Salman Rushdie, and Toni Morrison on the slightly slipstream side, and [William] Faulkner and John Steinbeck on the more traditional side.

East of Eden and Absalom, Absalom are particularly amazing, though in different ways.

Every writer is shaped by his personal experience, whether he admits it or not. I try to avoid directly copying events from my life into fiction, but my experiences in Asia (I lived in China, traveled in Mongolia, Cambodia, Thailand and Japan), and my travels in Europe and out west in the United States as a child gave me a wealth of experiences that are endlessly valuable in my work.

Bits of truth about life in China, and about the history of suffering there, show up from time to time in my work that's not set anywhere near China, for example. Certainly my sense of the pleasures and occasional torments of village life come from my experiences in China, and my students' discussions.

My main concern, honestly, is that it's quite difficult to make a living as a writer, and that in the context of a full-time job I won't find time enough to get serious work done. So far I've tried to fight that with a rigorous writing schedule, and had some success.

My biggest challenges arise when the obligations of life get in the way of doing real, capital-W work, without being a huge loser to my family and friends. As far as challenges go, these are pretty simple, I guess.

I once met a farmer in rural China who made 100 kuai a month (about $12.50) from his crop; I said that seemed a very small amount and he said it was fine, that he made a lot less during the Cultural Revolution. He's been through challenges far greater than any I've faced in this life, and there are still tons of people in the world worse off than him.

I write every day, though I don't have a set habit. I have an extremely portable word processor (an AlphaSmart Neo, if you're interested), that I carry with me while I'm writing, and if I have a few minutes I sit down and slam out a few sentences, a paragraph, a thousand words. The one-track mind is a great help to me there.

I've written several novels, one of which I'm submitting to agents as I write this; none of these have been published, though I have published a handful of short stories in small presses and magazines in the last two years: one short story of espionage and assassination, one about a group of Martian rebels, one about a dream-space-Viking invasion of Miami, and one about the travails of a Chinese doctor who discovers the secret to re-animating the dead (some of the time), all of which are linked off my website.

This year I'll be collaborating with Alana Abbott on a serial novel about fairy politics, gladiatorial combat, and political rebellion called Blood and Tumult, which should start appearing in fall on Baeg Tobar.

My latest book is a sort of legal procedural with necromancers; it took me the better part of six months to write, and is currently in the submission stage of its life.

The query letter and plot synopsis were the most difficult parts of the writing process, though I did finally get the hang of them.

Essentially, you have to distill the book you've written to a few sentences. The problem is, if you could represent adequately your book in those few sentences you wouldn't have written a book, you'd have written flash fiction. So then you think about it as an exercise in marketing and flash fiction, and it's (mostly) okay. Of course, the success of that method remains to be seen -- fingers crossed!

I enjoy writing the most. Putting one word in front of the other is great, especially when you feel that they're good words.

Revising is second-best. It's like whittling, only you're whittling your own child. Maybe it's more fun than that sounds.

Each of my books (and each of my pieces of short fiction, for that matter) have come out of different inspirations, and have been written in states of obsession with different topics. While writing this one, I spent a lot of time thinking about neural networks, religion, evolution, and finance, for example; previous books have been more concerned with Go, or with Genghis Khan.

I hope readers would say that all my books have interesting, well-defined characters, and a driving plot that consists of many wheels within wheels.

The next project is going to be Blood and Tumult, an exciting project that I'm collaborating upon with Alana Abbott. I'm looking forward to collaborating with someone so experienced on such an interesting property as Baeg Tobar.

So far, I'd say my most significant achievement as a writer has been persisting. Writers write, finish what they start, revise endlessly, and move on to the next project. That way (I hope!) the best story is always the next one.