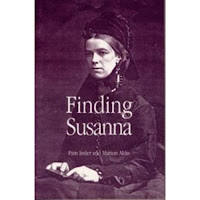 The books, which she wrote with Marion Aldis, include:
In this interview, Pam Inder talks about her writing:

How did you decide you wanted to be a writer?

I didn’t really have much choice about writing – I worked as a museum curator and writing catalogues, articles in journals etc was very much part of the job! However, the sort of writing I now do came about rather differently.

Back in the early 1990s, I did an MA in English Local History and became friendly with one of my fellow mature students, Marion Aldis, who was very interested in 19th century diaries. Some months after we finished the course – by which time I was working at Staffordshire University in Stoke-on-Trent – I helped a colleague with a local history project she was doing with a group of students which involved them in looking at original documents.

One of the sets of documents they were given to work on was a collection of diaries (in Keele University Special Collections Library). The students hated them – they were quite difficult to read – so I spent quite a lot of time helping them with that part of the project and realised that the collection was actually enormously interesting – and no-one else was studying it. I contacted my friend – and we embarked on what became a 12-year project tracing the history of these North Staffordshire diarists. Fortunately for us they were an eccentric, quarrelsome bunch so their lives made interesting reading ...(I can talk about this at length!)

Fairly soon we realised that the material was worth publishing and set about looking for a publisher. We wrote to a number of national publishers – none of whom were interested – then we heard about a publisher (now retired) in Leek and he published five books for us based on the diaries.

We write ‘popular history’ – for people who are interested in the same sort of things that interest us – the everyday lives of ordinary people, especially women, in the 19th century.

We both read a lot of history but I’m not sure there are many direct influences on our work. In some of our books – notably Finding Susanna, we incorporate quite a lot of the story of our research projects and our personal stories. Research is a form of detective work and the way we uncover information can sometimes be quite quirky.

We also have a lot of fun – we are both married women, not as young as we’d like to be, and going off on research trips together is very enjoyable, very different from the lives we lead as wives and mothers.

What are your main concerns as writers?

I suppose our main concern is, first of all, to do our research properly. What we write is always as factually historically correct as we can make it. The second concern is to try to make our subjects come alive – without relying too heavily on our imaginations. And the third is to write in a lively, approachable style. So much modern history is written in jargon.

Writing as a pair does help – we are quite critical of each other.

I, personally, don’t have any particular process for writing. I’m busy – I write when I have the time, while dinner is cooking, while the kitchen floor is drying – whatever. I certainly don’t write every day.

How many books have you written so far?
How would you describe your latest book?

The current book is about 19th century Norfolk women and it takes the form of nine single-chapter biographies of ordinary women who led successful lives within the parameters of their social class. None of them are in any way famous – we aim to shine a spotlight on the lives of ordinary people. One was a governess who went to the Ukraine, one was a lighthouse keeper, one a fishmonger, one the matron of a lunatic asylum, one a farmer, one emigrated to Canada – and so on.

Its always hard to say how long something takes. The research for each chapter probably takes about a month – or it would if you could work at it consecutively – but that’s not how research pans out.

We got the commission for this book in October and it goes to the publisher at the end of July – but we’d already done some of the work in another context. So you could say it took 10 months – or three years – or twenty years if you include learning how to do what we do!

Poppyland, our publisher specialises in books on Norfolk which is why we chose him – but in the real world publishers do the choosing, not authors. The only disadvantage so far is that he is based in Cromer which is rather a long way away – time will tell what other (if any) disadvantages present themselves when he actually gets the mss!

What were the most difficult aspects of the work that went into the book?

There are always all sorts of difficulties – for this particular book we have had to discard several of our subjects either because someone else was working on them or because their descendants didn’t like us writing about them, for example.

My biggest difficulty probably this time was finding illustration of a particular small town in the Ukraine – you’d be amazed how difficult that was.

You deal with problems as they crop up - they are all different so there’s no simple answer.

What would you say has been your greatest achievement as a writer?

Single biggest achievement? Well, I suppose getting fairly esoteric material published at all was quite clever – let alone having (so far) had three separate publishers.

Most of the people we studied with write and do research – few of them have published.