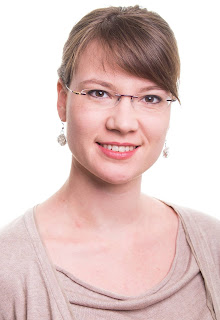 Ursula Kapferer was born in Vienna (Austria) in 1989 and currently lives in Freiburg (Germany). She studied German and English to become a teacher and is currently writing her PhD thesis on German-English poetry translation. She is also presently writing an article about translating the German poet Christian Morgenstern forthcoming in the traductology series ECHO.

In this interview, Ursula Kapferer talks about writing, poetry and poetry in translation.

I have always been fascinated with sound and rhythm which greatly influences both my writing and research interests and I am also interested in the different advantages and challenges when translating both from German to English and vice versa.

The two greatest influences on my writing are my family and the poets I admire.

Some of my earliest memories are my father carrying me around in the kitchen, while reciting Latin poetry. I remember being fascinated with the enchanting rhythms and sounds, even though I did not understand a word. Poetry was always part of our everyday life during my childhood: My grandfather recorded ballads for me and my parents used to read to me and each other while going on holiday. I think these childhood experiences shaped my love for poetry and especially for sound and rhythm.

My own writing has always been greatly influenced by the poets I was reading at a time. Leafing through my older poems, I can see the different poets who influenced me at the time shining through. It has always been easier for me to get a feel for a poem than finding my own voice. This is probably also why I started translating poetry.

Are there other ways in which your personal experiences have influenced your writing?

Poetry for me is closely connected to emotion. I would even say the two are inseparable in my experience. Strong feelings often bring poems to mind and also have resulted in several of my poems. Also, I still have great difficulties translating poetry which I do not have an emotional connection with.

The encouraging feedback of my private and professional environment is especially significant to me, for instance that I was invited to read one of my poetry translations at the T & R (Theories and Realities in Translation and wRiting) conference in Naples (Italy) in 2016.

Another significant achievement for me is that I managed to obtain two scholarships (first the “Landesgraduiertenförderung” and then the “Studienstiftung des deutschen Volkes Promotionsstipendium”) for my PhD project (which includes my translations as well as theoretical work on translation I mentioned above).

Especially since my work as a German as a Second Language teacher for Syrian and Iraqi refugees in Freiburg (Germany), refugee experience and integration have become personal matters for me. I think that poetry is able to play a significant role in the integration process which begins with mutual understanding, I believe. So, when I heard about the project via an email bulletin from EACLALS (The European Association for Commonwealth Literature and Language Studies), I started translating “but one country” by Rod Duncan the same day.

Which were the easiest aspects of the work you put into the project?

The easiest step to me always is the first one, the reading, listening and then beginning the literal surface translation before dealing with formal and other constraints. Surprisingly, also, problem solving can sometimes be easy if I do not try too hard.

If I do not find a solution straight away, I found that getting up, going for a short walk or even only to the fridge often clears my mind so that when I return to the desk, sometimes there is a solution – seemingly out of nowhere.

Which were the most challenging?

I love challenges of poetic form. In the case of Rod Duncan’s “but one country”, such a challenge was the shape of the poem in the form of a globe and the syntactic challenges in ensuring that the poem can be read in both directions, the two halves making contradictory statements.

I find it fascinating that it is often especially poems that pose (formal) challenges, such as this one, where I like my solutions best in the end. Straight forward, literal solutions usually do not work in such cases and force me to “go deeper into” the poem and come up with creative solutions.

This experience also influenced my interest in the constraint and creativity I work on in my dissertation project.

I think the value of initiatives like Journeys in Translation is - to use a poetry metaphor - that its form mirrors its content: The poems taken from Over Land, Over Sea: Poems for those seeking refuge express solidarity with refugees and can be described as transcending barriers between cultures and individuals on the level of content.

Journeys in Translation takes this one step further: It does not only overcome the monolingual barrier, but its open form (translation workshops and the use of social media like Facebook) enables a broadness and diversity that could not be achieved in conventional translation projects. The use of Facebook and the translation of the poems into many languages also make the poems accessible to a widespread audience and might be a valuable part of bringing the refugee experience closer to a larger number of people.

More information on how Over Land, Over Sea came about is available here.
Germany interview Journeys in Translation Poet poetry Poetry in Translation Translator Ursula Kapferer