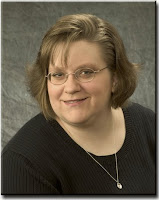 In this email interview, Tristi Pinkston talks about her writing.

When did decide you wanted to be a published writer?

I don't know if I decided it or if it decided me.

I've always wanted to be a published writer -- I can't remember a time in my whole life when this was not my goal. I sent out a whole ton of magazine articles while writing my first novel, thinking that would help get my name out there, but none of them ever were published. My novel, actually, was the first thing to get published, and then came two more after that.

It took a lot of submitting and rewriting before I found the publisher who fell in love with the story.

My main target [audience] is the people of the LDS (Mormon) faith, but my books have a broader appeal. They've been read and enjoyed by people of every religion and every nationality.

My parents, and also my grandparents and great-grandparents, who I believe have become my guardian angels.

I believe that we should take the things we learn from our personal experiences and use them to enrich our writing. There's a bit of me in every one of my books, no doubt about it.

My main concerns are telling the story in such a way that the reader can see what I'm seeing while I write.

I deal with the challenges of balancing motherhood and being a writer, trying to keep my house clean, and trying not to lose my mind, all at the same time.

I deal with it by realizing that things aren't as important as I thought they were.

If all the dishes didn't get done today, so what? The important thing is that everyone's needs were met, including my own.

When I'm working on a project, I write every day but Sunday. It usually starts with me putting the kids at the table with their lunch.

I proceed by checking my e-mail, and then I pull up the manuscript. It usually ends with a grumble and a sigh, because I was interrupted.

My first book is about the Japanese internment camps during World War II, and is entitled Nothing to Regret. It was published in 2002 by Granite.

My second book is also about World War II, but from the German perspective. It was also published by Granite, in 2004.

My latest book is by far my most personal. It's called Season of Sacrifice, and it's the true story of my great-great-grandfather who engineered the passage that would become the famous Utah landmark, "The Hole in the Rock."

It took me 80 hours to research and another 80 to write, which is a record for me, but I did have all the materials at my fingertips.

It was published in 2008 by Golden Wings.

I chose to have Golden Wings produce it for me because my great-great-grandfather was a polygamist, and the LDS market isn't currently publishing stories about polygamy.

Going with Golden Wings gave me more control over the project than I would have in any other way.

It does present the disadvantage that I'll have to work a little harder to sell it. So I'm doing this virtual book tour, promoting it in personal appearances, and doing whatever else I have to do.

I don't tend to write about easy subjects, and it was hard for me to try to imagine the lives these people led and how they so willingly submitted to their trials.

I loved the idea of telling this true story and honoring my ancestors by sharing their experiences, which are amazing.

It's different in that my other books are largely based on history but there's a whole lot of fiction in there as well.

Season of Sacrifice is mostly historical, with very little fiction. It's written in novel form, but everything in the book is based on fact.

It's similar [to the others] in that I put my heart and soul into it. It's well-researched, historically accurate, and well-written.

It's a contemporary mystery with some comedy thrown in.

Helping others to realize that they have the seeds of greatness within them and learning how to unlock them.

I teach writing classes throughout the year and I love seeing someone allow their talents to shine.