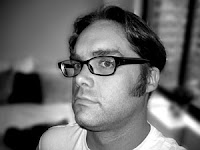 He holds a Master of Fine Arts degree in creative writing from Penn State as well as a masters degree in Library Science from Pratt Institute.

In this email interview, Dave Wellington talks about his concerns as a writer

I started writing when I was six years old. I didn't publish my first book until almost thirty years later. It took a lot of practice to get it right.

How did you decide you wanted to be a published writer?

I've always believed that a writer has to be read to know if he's any good or not, and the only way to get people to read your books is to publish them. Unfortunately, that's often the hard part.

I spent a lot of time sending manuscripts to various publishers and getting very little feedback. It has become very rare that a major publisher even reads an unsolicited submission -- they just don't have the time.

What finally worked for me was putting my work on the Internet. I thought I might get a few readers who would provide me with some much needed feedback.

The results were surprising -- so many people read and enjoyed my first online novel, Monster Island, that a publisher actually approached me and asked to buy the book. I feel extraordinarily lucky.

I write action horror novels. Typically there are monsters involved, and people who have to fight those monsters.

Sometimes I like to try something different. My next book online doesn't have any monsters in it, for example, though some of the people are very scary. I suppose that technically makes it a thriller.

My target audience is anyone who reads and enjoys a good story!

I write the kind of books I enjoy reading. They're fun, they're fast, and they have good solid endings.

My books tend to be about fantastic subjects that are beyond normal human experience. Yet I like to give them some level of realism to keep the reader grounded.

Often I'll put in things I know about firsthand. One of my books was about an employee of the United Nations; I worked for the UN at the time I wrote it. While I was in library school, I had a book whose hero was a librarian.

When you publish a book you establish an expectation that you'll only ever write very similar books. I love writing about monsters but I want to do other things as well. Luckily I can publish one kind of book in print and put a completely different book on the Internet, so I have the opportunity to experiment with different styles and different genres without having to worry about who will publish a given project.

The toughest part of writing is the first word. The blank screen is very intimidating.

Oh, and titles are very difficult, too!

I write all day, every day. However I do take lots of breaks.

I find I write best a little at a time, a few paragraphs here, maybe another paragraph an hour later. I work a regular business day, from nine o'clock in the morning until six o'clock in the evening.

I have published five books so far, with a sixth due out in October, 2008. They are as follows:
How long did it take you to write your latest book?

My latest book, Vampire Zero, is a third volume in my vampire trilogy. It took me approximately six months to write it.

It will be published by Three Rivers Press in October, 2008.

I've worked with this publisher before and have a good relationship with them. So far I've been very lucky -- everyone there is wonderful and very easy to work with.

The hardest part of writing this book was finding a place to do it. Normally I work out of my home but I could not do so with this book because there were too many distractions. I found office space where I could, or worked in libraries.

I enjoy the whole writing process.

I love coming up with new ideas and playing with them, and also I love the actual writing when words just seem to flow and shape themselves.

What sets Vampire Zero apart from other things you've written?

This is a much more psychological book than my previous works, which were just pure action.

This one has plenty of action as well, but it also gets deeper into the minds of the characters.

This is the third volume of a trilogy and all the characters I love come back for this one, though some of them come back very much changed from how they appeared in 99 Coffins...

My next book will be another vampire novel. The plot of this one is a secret!

After that I'll be publishing two books about werewolves.

The most exciting moment for me was when I got my first book contract. I had been working for nearly thirty years to get to that point with nothing to show for it! Suddenly I was a published writer.

My parents were extremely proud of me.

This article has also been featured on OhmyNews International.