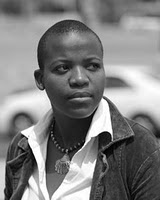 She is also the founder of the Read SA campaign, a campaign encouraging South Africa to read.

Her first novel, The Madams was shortlisted for the 2007 K Sello Duiker Award.

In this interview, Zukiswa Wanner talks about her latest novel, Men of the South, which has been shortlisted for the 2011 Commonwealth Writers’ Prize:

How would you describe Men of the South?

In an age where the world is battling with equal rights, Men of the South is a story of the struggles that modern day man is struggling to come to grasps with despite his apparent advantages over his female counterpart.

While, in retrospect, and to most readers, it may appear that my more powerful characters are the first two protagonists, the story was actually a backward thing and came about as a response to the world-famous 2008 negrophobic attacks in South Africa.

The first draft took me the usual two to three weeks it takes me to write but given that there is always edits to do before final publication date, I would say a year and a half.

Which were the most difficult aspects of the work you put into the novel?

I think it was the adjustment from being one male character to another. With three protagonists, I had to work very hard not to make the characters sound as though they were the same guy.

The way I wrote it was experimental as I had never written using the male voice in a novel before - let alone three male voices. So to make it work, I had to focus and do extensive research on the particular character I was working on at any point in time, id est the stay-at-home dad; the gay male in the closet; or, the educated immigrant forced to take a job that's below their qualifications.

I think I really got into Men of the South and the characters in a way that I have not with any of my other books.

It was also the only book that I have since read post publication many times and enjoyed -- not as my work but as "quite an interesting piece of art."

I believe I have very far to go as a writer but, somehow, reading this book, for me, was like watching yourself in the mirror and thinking, "Wow. I am growing."

What sets Men of the South apart from other novels you've written?

What I mention above. The fact that it was the one book that I have written that I could read post-publication from beginning to end.

It is also my first book where I have not focused on women's issues (and that is not to say I am a post-modern anti-feminist female) but tried to understand the other side of the coin that is manhood. In some ways it was easy for me as I am a mother to a son and kept putting my son in the shoes of all the different male characters in my book.

The other two books have been focused on contemporary social commentary of what bothers me as a woman. So in some way, I think of Men of the South as the male answer to The Madams and Behind Every Successful Man but this time not as spoken by what some women might think is a biased male voice but more from another woman writing in a way she perceives menkind.

I think Men of the South's greatest similarity to my other fictional work is that its set in contemporary South Africa.

I have been referred to in some parts of South African media as Lit-Lite because the language is as accessible as that on television. My vision for books is making them accessible and enjoyable to people who would generally not pick up a book.

When I start preaching to the converted that are the literati, I think I will start thinking of myself as irrelevant.

That said, although the issues my characters deal with from the first book to the present are presented in a non-preachy way, they are not any less serious for that.

And, despite its setting, one of the other constant comments I have been told about my work from people all over the world is that although the characters are South African and mostly black, the readers can identify with the characters in my books. It is a revelation of the similarity of the human condition.

How did you chose a publisher for the novel?

I didn't so much as chose a publisher for Men of the South. I worked with Kwela for my second book (Behind Every Successful Man) and I had a good relationship with the whole team so we both didn't see any need to terminate it (and, I hope, they liked my manuscript).

I am working on two manuscripts and I am not sure which I will let out first so I cannot for sure tell you what my next book will be about.