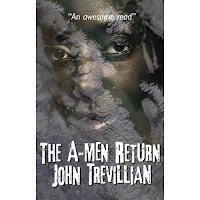 Freelance writer and journalist, John Trevillian is the creator and designer of AEs Mail Adventure, an award-winning interactive writing game. He is also head of the AEs Society, an international group of shared-world authors and writers.

In 2009, he was a finalist in the YouWriteOn Book Awards.

A full and unabridged podcast of The A-Men is available from libsyn and iTunes.

In this interview, John Trevillian talks about his writing:

My mother was given a Smith-Corona typewriter and she let me play on it from the time I was four. By six I’d typed my first (four-page) novel based on the adventures of a crazy professor (more than a little stolen from the Professor Branestawm books by Norman Hunter). I’d even left spaces for illustrations that I coloured in afterwards. No wonder I ended up with a career in magazine publishing.

When I started writing, writing was all I wanted. It wasn’t until finishing my second novel did I really and seriously think that anyone would pay to read this stuff. There’s a term ‘hedge druid’, ie one who works alone. That’s been me up until about six years ago. I’ve written over two million words of fiction (including two interactive soap operas, five novels, many travel journals, poems and songs) but it was all for myself and a close knit group of friends and shared-world authors. For me writing is the journey, not the publishing.

Down-and-dirty neo-punk speculative fiction. Yet it’s far from being ‘big and dumb’. Dig deeper and you’ll find these are stories about the fundamentals of belief, happiness and the eternal quest to solve life’s mysteries.

Only the relationships part, but my studies in world storytelling is key to The A-Men books-within-books ideas.

My biggest challenge is getting the ideas from my head and into the story without losing the original seed. For all their fast-paced action, the core ideas are quite complex and take a lot of subtle organization to get right.

For example, I re-wrote the first 70,000 words of the original novel three times before the motivations of the five main characters all felt natural at the point where all their paths cross. I have a good editor who points out all the missing exposition that I should have put in ...

Since the first novel was published an increasing amount of time has been spent editing and marketing, but I’m hoping to get back to writing in the near future.

As I have a full-time career in magazine publishing with a long commute, I write usually on a Sunday and then edit via laptop on the train into work. It’s a hard juggling act, but it helps I have my own space to lock myself away in at home.

The A-Men series (comprising The A-Men, The A-Men Return and Forever A-Men) have been written with a publishing schedule of 2010, 2011 and 2012 respectively.

They are all published by Matador in the UK and available online in hardcover, Kindle and ePub from the usual places. Or directly from my website.

The latest book is The A-Men Return and was actually the first book written in the cycle. This is no trilogy padding second novel, but the core of the story arc. It took close to three years to complete as I had no deadline and lots of ideas to wade through.

The most difficult aspect when writing The A-Men is the sustaining of the different first-person voices of the five main characters. This kind of literature demands realistic narrative voices and is very different from most of the other writing I have undertaken so far.

To get the street slang voice of the main protagonist The Nowhereman, I read a lot of Kerouac and other 1940s noir novels, then drank lots of Jack Daniels and just let it flow. Once I had the voice, I finally managed to devise a way to tap into that “inner Jack” without the alcohol.

The most enjoyable aspect of the trilogy was planning the faerie story underpinning the science fiction post-apocalyptic narrative. I had a notion once that wondered what would happen if in the ruins of civilization someone dug up a copy of The Lord of the Rings and thought it was real history. The A-Men is like that. It takes that idea and runs with it, all guns blazing.

What sets The A-Men apart from other things you've written?

All my novels are about belief, and how this one aspect makes or breaks our lives. That seems simple, but it’s taken me a long time to see and realise it.

The A-Men is very different from my previous writing. The first was an epic fantasy called The Mortal And His God, which will never see the light of day (but which I am rather fond of).

Another was a contemporary horror story called Cutter’s Wood. Both these works have areas on my website for the curious.

The third of the trilogy is Forever A-Men which will be launched in March 2012. This completes the story cycle with a wild ride into the left-field that should be a surprising complement to the previous two novels. It’s also my favourite as the characters have suffered so much, and we have suffered with them, that the raising of the stakes for the end-game is really satisfying.

Weirdly, it wasn’t publishing. I’d say it was actually finishing the first draft of my first novel. The sense of achievement to have a completed story was really something.