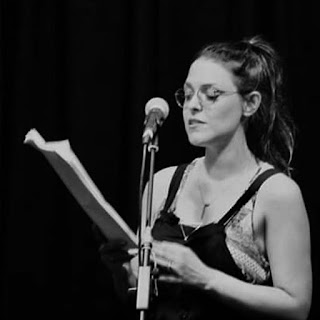 Sarra Culleno is a London-born, Manchester-based UK poet, a mother of two and an English teacher.

She writes about issues that include children’s rights, motherhood, identity, technology and politics. Her work has been published in magazines and anthologies that include Les Femmes Folles (‘Lost in my DMs’, ‘Song of the Young Mother’ and ‘Phone Phantom Pantoum’), Three Drops (‘PMT Virelai’), Hidden Voices (‘Hansel and Gretel, the Woodcutter’s Children’) and in Bollocks to Brexit: an Anthology of Poems and Short Fiction (CivicLeicester, 2019).

In 2019, Sarra was longlisted for the Cinnamon Press Pamphlet Prize and appeared as a featured poet at HerStories Festival, Celebrate Whalley Range, and That’s What She Said (For Books Sake).

In this interview, Sarra talks about her writing:

I've always written, but only started sending pieces to publishers this year.

I'm an English teacher, so I have taught the nuts and bolts of poetry for sixteen years. My two children are now old enough for me to have a hobby which led me to performance poetry and spoken word events. 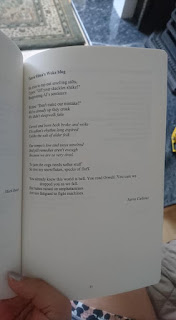 It's a mixture of formal and blank verse, on themes of dual heritage identity, motherhood, monogamy, the education system, gender, and politics.

The motherhood poems are autobiographical, as are the dual heritage identity poems. I'm of Iranian-Irish descent which did not seem particularly interesting or unique to me until I left London in my twenties.

My poems on the education system are rooted in my experiences as a classroom teacher and mother of primary school age children.

I hadn't realised the impact Sylvia Plath had on my writing till recently. I can see the influence of her cadences and extended metaphor. Hafsa Aneela Bashir, more recently; her bravery is raw and visceral which made me braver when writing about painful personal experiences such as post-natal depression.

My main concern is producing a finished poem, but I can't stop tinkering with syllable counts, metre and so on even after I've sent them off! I'm very badly organised, so I do not keep track of what I've submitted where... Sooner or later a publisher is going to get very cross with my simultaneous submissions!

What are the biggest challenges that you face? And, how do you deal with these challenges?

Rejections are hard to take, but it's an unavoidable part of writing. It's also a chance to ask myself what I can improve.

I can't write everyday. I have a demanding full-time career and two small children. I get my ideas while driving home. Before I get out of the car I scribble them into a notebook. Once the children are asleep, I'll do my research and choose a suitable form which I hope will enhance the meaning or topic. Finally, I'll sew it together and then review it in a day or two. Then the tinkering starts... And never stops!

I'm writing my poetry collection at the moment. I started it in February and I'm still working on it now. I have about forty poems I'm happy with and many more I've cut. When I have about eighty, I'll submit it for publishing as a book rather than a chapbook. An early draft of it was longlisted for the Cinnamon Press Pamphlet Prize this year. I hope I've improved on it since then.

When I've finished, I'll submit it to small presses based in the North West and London as it will be easier for me to be involved in launch events. The types of publishers which I think would be a good fit, would be women-focused and known for releasing titles exploring gender.

Which aspects of the work you are putting into the poems do you find most difficult? Why do you think this was so?

I ended up scrapping all my spoken word poetry from publishing submissions, and I will not usually read my more formal poetry at performance events. I love both for different reasons, but only a few of my poems cross over. I've tried to include a number of accessible poems in my collection, which are not in the least oblique or literary, hoping this will broaden appeal. I've recorded readings for some of these on my YouTube channel.

I most enjoy writing poetry when an idea emerges of its own accord, and writes itself. It's depressing when there's a "drought", though.

I'm looking forward to the school holidays to start the writing flow off again.

One of your poems, ‘Terza Rima's Woke Blog’ is featured in Bollocks to Brexit: an Anthology of Poems and Short Fiction. How did the poem come about? 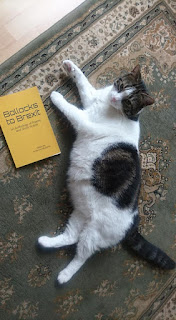 I wrote ‘Terza Rima's Woke Blog’, for my pupils and younger colleagues. Neither can build any stability into their futures, and yet they are the hardest working and most conscientious people that I know. I feel their generation is forsaken.

Advertising agencies were employed to peddle Brexit and manufacture consent. Marketing companies know that facts will not sell products, but that emotions sell a brand. There needs to be awareness raised for both sides, that referendums are opinion polls, not unbreakable contracts. Perhaps this is where poets could help.

It's important for everyone to speak up. But if you have an unusual way of saying it, it's to your advantage.

My worry is that Brexit is what Chomsky might call "a Roman Game of Circus" designed to incite a very narrow but impassioned debate involving both left and right, to distract us all from what is really going on: the stripping of human rights to bring our workforce in line with China and India, and to colonise our publicly owned assets in the TTIP deal. Chomsky, in his explanation of how we are kept passive, puts it better than me, when he says in The Common Good, "Limit the spectrum of acceptable opinion, but allow very lively debate within that spectrum..."

In your view, what do anthologies like Bollocks to Brexit add to poetry and public discourse? Why does this matter?

As a reader, I prefer anthologies as you get a broader perspective on a theme, and experience multiple forms and styles.

Politically, art resonates better than facts, figures and debates. And if Brexit proved anything, it's that people follow their hearts. Not their minds.

The TTIP deal was debated a lot on social media before the referendum - it has vanished entirely since. The debates on public services, spending, living standards, and many other pressing issues are silenced now too. Brexit is the greatest political distraction ever contrived. It was never a possibility or even a yes/no question. It's important for anyone who realises this, on the left AND the right to reach people still arguing about a non-starter distraction. We still have to protect our hard won rights from the greedy, who will happily turn us into an impoverished, enslaved, poisoned and hateful nation.

Brexit is “a non-starter distraction” because it was invented as a Roman Game of Circus, purely to divert debate from other issues. It is an impossibility, but while we all argue about it, our civil rights and public assets are being stripped under our noses. It is useful for the government to prolong their inevitable admission that it was never going to happen, as this cultivates a climate of fear and apathy, which controls everyone (those of us already impoverished, and also anyone left who realises however little we have can be taken away). I believe they will push the deadline forward each time it arrives until they eventually admit they had no intention or means to take the eggs out of a cake which is already baked. So to speak.
Bollocks to Brexit interview Manchester poetry Sarra Culleno writing