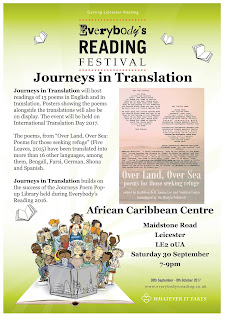 As part of events to mark International Translation Day 2017 and as part of Everybody's Reading, Journeys in Translation will be hosting an event at which 13 poems will be read in English and in translation.

Posters showing the poems alongside the translations will also be on display.

The event will be held at the African Caribbean Centre on International Translation Day which, this year, falls on Saturday, September 30.

The poems, from Over Land, Over Sea: Poems for those seeking refuge (Five Leaves Publications, 2015) have been translated into more than 16 other languages, among them, Arabic, Bengali, Chinese, Farsi, German, Hindi, Italian, Shona and Spanish.

The event is free and open to all.

If you cannot make it to the September 30 event in Leicester, you could:

Over Land, Over Sea: Poems for those seeking refuge was edited by Kathleen Bell, Emma Lee and Siobhan Logan. The anthology is being sold to raise funds for Doctors Without Borders/ Médecins Sans Frontières (MSF), Leicester City of Sanctuary and the Nottingham and Nottinghamshire Refugee Forum.

June 04, 2007
Poetry, Football and the Spirits in the Sky For centuries, people in the northern hemisphere have been so entranced by aurora borealis , the eerie display of lights that invade the winter skies, that they have woven myths and legends around these lights. Colour Catchers , an all-star cast poetry performance that will be hosted on December 12, 2006, by Leicestershire poet, Siobhan Logan will be exploring some of these myths and legends. The performance will revolve around a sequence of 13 poems which range from intimate personal accounts to epic narratives of unearthly journeys. Siobhan Logan says: Some of them focus on the science of what we know about the Aurora Borealis. But for most, I've raided this fantastic story-hoard from countries across the Arctic Circle. "Naming the Lights", for instance, is based on the various names used for the lights by people from the Native Americans of Alaska, to the Inuits of Greenland, the Scots, Laplanders, Russians, etc.
Read more 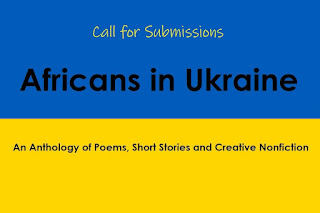 CivicLeicester is inviting and accepting poems, short stories and creative nonfiction (including memoir, diary entries, chronicles, biographical and autobiographical accounts, letters and other narratives) on the theme, Africans in Ukraine . We welcome submissions exploring: the lived experience of being an African in Ukraine what brought Africans to Ukraine their lives in Ukraine before the current Ukraine-Russian War what happened when the war broke out experiences of and flight from the conflict the images, issues, histories, lives and demands that Africans in Ukraine are highlighting the reception Africans got in neighbouring countries or in their countries of origin, and what happens or what should happen next .  We welcome submissions from writers of all ages, based anywhere in the world.  We particularly welcome submissions from people of African descent who were living and studying in Ukraine and those who witnessed or are witnessing what this group of people are going through
Read more

August 31, 2011
Erik Schmidt lives in Georgia and is a sports editor and a freelance writer. 10 of his short stories appear in the anthology, Cover Stories: A Euphictional Anthology (CreateSpace, 2010). In this interview, Erik Schmidt talks about his writing: When did you start writing? I had to write fictional stories throughout elementary school, but I started taking it seriously — or at least as seriously as any 11-year-old boy can take anything beyond backyard football and baseball cards — in sixth grade. Our teacher, Mrs. Jacoby, consistently had us write 100-word essays and then read them aloud in class. I remember thinking some of the topics were boring or uninspiring, so I started creating my own themes for my own amusement. They weren’t anything special, but it was important for me to realize that innovation, creative thinking, and stepping outside the expected parameters are huge elements in the writing process. There was no epiphany or mind-blowing realization in regards to
Read more

February 12, 2021
Poetry and Settled Status for All: An Anthology (CivicLeicester, 2022) is now available. This call for submissions is now closed. CivicLeicester is inviting and accepting poems and short fiction on the theme, Settled Status or Indefinite Leave to Remain for All.  The editors will also consider poems and short fiction exploring themes that include:  ● lived experience of being a migrant or an undocumented migrant or seeking refuge in Britain and the Irish States,  ● migrant, undocumented migrant or refugee experiences of rural and urban life, education, housing, work, healthcare, immigration and asylum systems, and  ● the hostile environment.    The call for submissions is inspired by how, in Britain and the Irish States, in response to the Covid-19 pandemic, several coalitions, including the Status Now Network (SNN), Members of Parliament (MPs) and groups that are concerned about the welfare of refugees and migrants are calling for settled status or indefinite leave to remain to be gr
Read more

Bollocks to Brexit: Poetry & Microfiction - a Call for Submissions

January 16, 2019
Bollocks to Brexit: an Anthology of Poems and Short Fiction (CivicLeicester, 2019) is now available .* We are inviting, and are accepting, poems and short fiction on the theme, Bollocks to Brexit . Brexit has polarised the country and led to the normalisation of xenophobia, Islamophobia and hate crimes. Can the harm it is causing be stopped? Can it be reversed? Who should clean up the mess which the politicians have made and are making? What will the future be like for Britain? Who will be the winners and who the losers? Should it be like this? Should the country be divided in two? Please send the poems and short fiction to civicleicester@gmail.com by 11pm on Friday, 29 March 2019 . Submission Guidelines ● Poems should be 40 lines or less, and short fiction, 100 words or less. ● The poems and short fiction should be on the theme, Bollocks to Brexit . ● Submissions must be in English. In the case of translated work, it is the translator’s responsibility to obtain permis
Read more

December 04, 2008
Gary Albyn was born in Zimbabwe in 1960 and currently lives in South Africa with his wife and two children. His poems have been featured the anthologies, Forever Spoken (International Society of Poets, 2007) and The Best Poems and Poets of 2007 (International Society of Poets, 2008). His gift book, Manzovo: Place of the Elephants (30° South Publishers, 2008) is an illustrated 110-verse poem that comes with a DVD of the poem recited by the South African Shakespearian actor, John Whiteley. In this email interview, Gary Albyn talks about his concerns as a writer: When did you start writing? I started writing the poem Manzovo: Place of The Elephants in late 2003. The saga of the matriarchal herd just continued to evolve and develop over a period spanning 14 months. Upon completion, and without any notion of publication, I decided to memorize the story in order to be able to recite it to like-minded audiences; people with an abiding love and respect for our environment and nat
Read more

June 08, 2020
Black Lives Matter: Poems for a New Word (CivicLeicester, 2020) is now available * CivicLeicester is inviting and accepting poems and short fiction on the theme, Black Lives Matter . We welcome submissions exploring any of the images, issues, triggers, histories, lives, demands and outcomes that are being highlighted by Black Lives Matter and current and past protests. We welcome submissions from writers of all ages, based anywhere in the world. The video of George Floyd dying as a white policeman pressed his knee against Floyd's neck and kept it there even after Floyd had stopped speaking or moving has triggered weeks of mass protests around the world. The protests are taking place in the midst of a global pandemic that is also disproportionately killing people from Black, Asian and ethnic minority backgrounds. Around the world people are demanding justice. "Black Lives Matter", "Hands up, don't shoot", "Am I a threat?", "I
Read more