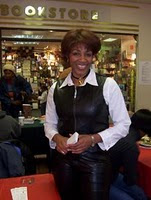 What motivated you to start working on the novel?

I have to say that it was a combination of love for the characters and curiosity.

I had barely written the last words of Dream Runner before I began wondering about the rest of the story -- well, that and the characters started to “haunt” me.

I also got tons of emails and letters asking (actually demanding!) to know about Rissa and Dench.

How would you describe Dream Keeper?

Here’s hoping that I did an absolutely brilliant job on Dream Runner, and readers will remember Rissa and Dench …

Dream Keeper begins about five years later, and we find that Rissa and Dench are now married and enjoy a nearly perfect marriage. Though neither of them would ask for more in a mate, Dench was raised by an aunt and has no other family, while Rissa had both parents and her much loved brother. Knowing that the connection of family has always been one of Dench’s deep desires, Rissa wants a baby for them, and when she finds herself pregnant she is sure that their dreams are about to be fulfilled.

But when she loses the baby, she’s faced with anger, depression, and obsession. Dench has always been the man for her, and he is the man who would walk through fire for her, but is he man enough to hold on to her? And will a baby ever make three?

How did the idea behind Dream Keeper come about?

Oddly, it just sort of slipped up and ambushed me.

Rissa and Dench are secondary characters in Dream Runner, and I thought that was where they would stay, but they had other ideas, and thoughts of Dream Keeper were born. In writing, they grew and began to develop themselves in my thoughts and I liked them and their connection enough to know that they would have a story of their own.

As for the loss of a child and infertility issues, I work in wellness/fitness and have had to follow clients through somewhat similar circumstances, and it was something I wanted to view more intimately. In my thoughts, Rissa and Dench had the kind of connection that would help a couple survive and thrive through that kind of situation -- and Dream Keeper is the result.

How would you describe the process that went into creating and producing the novel?

Because I am a traditionally published author, one of my biggest issues could have been convincing a publisher that Dream Keeper was worthy of the money and effort that would go into producing it. Happily, my publisher (Genesis Press) loved the story as much as I did and has been very supportive.

It helped that Rissa and Dench were clearly a couple at the end of Dream Runner, so that left me looking at who and what they were destined to become. With that in mind, I began with a simple outline -- a blank page where I listed the things that I could see happening to them over a period of months and years. By the time I got to item # 20, and knew that I could continue, I knew that I had a story that could be fully developed and passionately written.

I used my initial outline as the skeleton for the story. The items I had initially listed became the framework for chapters that I could move into logical patterns and build upon.

Ultimately, the framework allowed me to develop the characters and their story.

How did you know when and where to stop?

This is a hard one … Like most writers, there is always one more line, or just a little more to tell.

And, yes, I am the woman who once tried to talk the postman into giving a manuscript back because I thought of something I wanted to add.

But the reality is that every story must come to an end, and you have to give your baby a chance to stand on its own.

For me, this is where the outline is an invaluable tool. If an item, or a story detail doesn’t fit into the timeframe, locations, or other dictates of the outline, it’s out -- and you have to be very definite about it!

How long did it take you to write Dream Keeper?

Every minute of four months -- this was an almost non-stop project.

Which were the most difficult aspects of the work that went into the novel?

The hardest thing for me was the chronology. Keeping things in order is hard enough in the real world where we rely on things like clocks and calendars to keep us straight, but to have to set up separate calendars, and then go back and re-read both the first book and its notes in order to outline and plot the third book was … difficult, confusing, and way too much fun, because I learned a lot in the process.

I am, by nature, process-oriented. This doesn’t mean neat or organized, so I had to learn a whole new set of skills to cope with organizing the information and developing the characters in and for Dream Keeper.

What did you enjoy most about the work that went into the novel?

I don’t know if I ever shared the fact that I am an only child.

One of the things I enjoy most in life is watching the interaction between siblings, and Dream Keeper gave me a chance to not only watch, but to manipulate the relationships between siblings, friends, and lovers, to my satisfaction.

How different is this novel from other books you have written?

Dream Keeper, like all of my other books is an African-American contemporary romance.

It is different from my other work because it is the first sequel I have written. I usually write single-titles, meaning that each story is completely told in one book, and my characters do not usually overlap books, even when their locales coincide -- but this time was different. I found Marlea and AJ, and Rissa and Dench to be passionate, compelling, real, and likeable -- to an extent, I felt obligated to finish their story.

Was this by accident or by design?

Dream Keeper was an initial accident, but has ultimately become part of the story design.

What are your plans for the future?

I will be a contributor to Can a Sistah Get Some Love? -- a romantic anthology from Lady Leo Press (February, 2010). My story, “The Twentieth Century Fox” will be one of four in the volume, and I can promise enough sighs and smiles to keep everybody reading.

And, if I did my job well in writing Dream Runner, readers will remember bad girl Bianca Coltrane -- and she was very, very bad. But I believe in redemption, and will be sharing her story in a new novel, Wayward Dreams (June, 2010). Without offering a “spoiler”, I can tell you that fate has a lot in store for her on the way to love.