May 18, 2017
Do you live in Leicester or Leicestershire? Can you speak more than one language? Or, are you learning another language? These free, poetry translation workshops taking place in libraries, from May 23 to May 27, are for you.

Journeys in Translation and the Leicester Library Service are holding a series of poetry translation workshops as part of the 2017 Festival of Learning.

The workshops are open to all and will suit anyone who is bilingual, multilingual or who is learning another language.

They offer participants the chance to read, discuss and look at how 13 poems from the anthology, Over Land, Over Sea: Poems for those seeking refuge (Five Leaves Publications, 2015) might be translated from English into other languages in an informal, relaxed and supportive atmosphere.

No prior translation experience is required.

The workshops will be held on:


The workshops will be delivered by Journeys in Translation coordinator, Ambrose Musiyiwa who is also the co-editor of Welcome to Leicester (Dahlia Publishing, 2016), a poetry anthology that explores what Leicester means to people who know the city well.

Through translating poems, the workshops are an opportunity to celebrate the multiplicity of languages in Leicester and the richness they bring.

It will also be interesting to see what happens when a poem migrates from one language to another.

Journeys in Translation encourages people who are bilingual or multilingual or who are learning another language to have a go at translating 13 poems from Over Land, Over Sea from English into other languages and to share their translations and reflections on the exercise on blogs, in letters and emails to family and friends, on social media and at poetry and spoken word events. 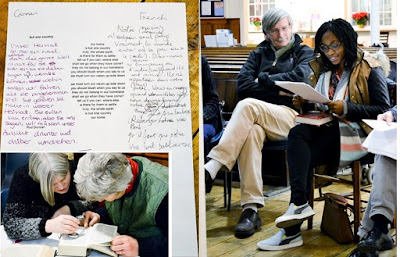 Journeys in Translation will culminate in an event that is going to be held on September 30 as part of Everybody's Reading 2017.

Over Land, Over Sea: Poems for those seeking refuge was edited by Kathleen Bell, Emma Lee and Siobhan Logan and is being sold to raise funds for Doctors Without Borders/ Médecins Sans Frontières (MSF), Leicester City of Sanctuary and the Nottingham and Nottinghamshire Refugee Forum.


We were really excited to be offered these workshops as part of our Festival of Learning programme of events.

The workshops are highly relevant to both libraries and multicultural Leicester. They will appeal to anyone who speaks more than one language or who is learning another language and are not to be missed."

[2] The translation workshops are free and open to all. Booking advised. Participants can book a place by calling the libraries the workshops are being held at.