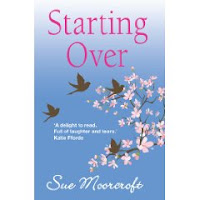 In this interview, Sue Moorcroft talks about her latest novel, Starting Over:

What would you say the novel is all about?

Starting Over is about Tess Riddell who, whenever she has a problem in her life, just moves on and starts over somewhere new. It’s a strategy that family and friends have problems with and, eventually, Tess finds a strong enough reason to tough things out.

How did the idea behind the novel come about?

The central male in the book, Ratty (Miles Rattenbury), came to me first. I was watching Kevin Kline as the Pirate King in a film of The Pirates of Penzance, my favourite Gilbert & Sullivan operetta. He was so swashbuckling, joyful and energetic … and that’s how Ratty entered my imagination. I like Ratty because he likes cars and so do I.

In Tess, I wanted quite a flawed heroine. One who had to really learn a lesson by the time the story concludes. She struggles with facing up to things for the whole book and it brings about a stormy finale when Tess forces herself to face up to something but goes about it all the wrong way.

These characters really captured my imagination and the combination of their two quite different personalities was bound to produce sparks. What interested me was whether they could work things out. Or whether they’d bother.

I began this book a long time ago -- about eight or nine years. It wasn’t right, then, although it got me an agent.

Later, I heard about the publisher, Choc Lit, and when I saw that they wanted a strong hero with part of the book written from his point of view, I felt the time had come to revisit the book and see if I could see what was wrong.

Time gave me objectivity and I re-wrote sections, particularly at the beginning. A book’s content can age quite rapidly -- mobile phones had gone from a luxury item to a commonplace one, for example. It’s surprising what a difference that can make to the logic of the plot.

How would you describe the process that went into creating and producing the book?

Initially, I just began to write and let the plot take care of itself. (This isn’t an effective way of plotting, for me!) Then I went back and took out everything I realised wasn’t impacting directly on the thrust of the book. Then I explored the function of Olly, Tess’s ex-fiancé, a little more thoroughly. This brought the book into shape. I saw that having him only off-stage, as he once was, was illogical.

Stopping a relationship book is reasonably straightforward -- you have to decide whether the characters will get together or be ripped apart and then you do that, in a decisive manner. The temptation is to try and stay with them too long but I was quite stern about leaving Tess and Ratty at the conclusion to the story. Well … except for a short epilogue just to check up on them!

And giving Ratty a little cameo role in the next book …

When you’ve spent a long time with lovely characters it can be hard to let them go.

Which were the most difficult aspects of the work that went into the book?

I have to say that I enjoyed writing this book and also the re-writing that went into it. I understood comparatively late that something was wrong with the first chapter and, when I had that in shape, I had a really good feeling about the whole.

There is a scene in the book where Olly tries to bring Tess into line by insisting that her friend’s child, Jenna, is Tess’s (and, therefore, Olly’s) born in the interval between Olly backing out of their engagement and returning to seek Tess out some time later.

For a long time, I felt that Olly might actually have whisked Jenna away to use as a weapon against Tess. Finally, I saw that it wasn’t appropriate. Kidnapping -- which is what it amounted to, although you’d have a hard time convincing Olly of that -- belongs in a book that explores different issues to Starting Over. Kidnapping needs to be the focus of a story, not a sub-plot. So, I modified the situation and now I think it’s an impactful scene rather than a segment that’s out of keeping with the rest.

What I always enjoy -- polishing and editing.

Getting the first draft down is always the most difficult part.

How similar and/or different is it to the other books you have written?

It’s different to Uphill All the Way and Family Matters in that the central characters are a little younger and there is a focus on two characters, Tess and Ratty rather than four.

Starting Over is also a touch more humorous then the first two -- in fact, it’s categorised as a romantic comedy. The book that I hope will be published in 2010, All That Mullarkey, will be, too.

When I sold Uphill All the Way and Family Matters, there were openings for middle-aged heroines with ‘issues’ to address. That’s what some publishers were looking for, so that’s what I gave them. But Starting Over and All That Mullarkey are what I write from my heart -- the same kind of stuff as I like to read, with an involving central relationship and a few smiles along the way.