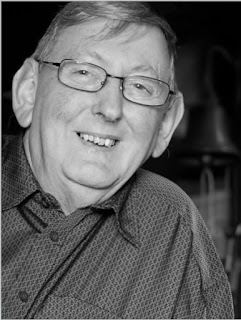 Novelist and short story writer, Tony R. Cox was a reporter at the Derby Evening Telegraph in the 1970s, and a Business Editor at the Nottingham Evening Post in the late 70s before moving to public relations and running his own business-to-business consultancy.

He is the author of the crime thriller novels, First Dead Body (The Choir Press, 2014) and A Fatal Drug (Fahrenheit Press, 2016), both of which are set in Derby. First Dead Body has been described as encapsulating "the life of 1970s reporters when lunches were often long and liquid and it was the norm to meet contacts in pubs like The Dolphin, The Exeter Arms, The Wagon and Horses." While in First Dead Body, the action takes place in Derby, in A Fatal Drug, an investigation into the discovery of a mutilated body reveals a spiral of gangland drug dealing and violence that stretches from the north of England to the south of Spain.

In this interview, Tony R. Cox talks about his writing.

I was editor of the school magazine; a regional journalist for 15 years; 25 years in public relations, mainly writing for newspapers and magazines nationally and internationally.

In 2010, after I’d decided to semi-retire, it was suggested that I write a memoir of what I used to get up to in the early 70s when I was heavily involved in rock and jazz music reviews and everything that went with it. That formed the kernel of an idea for a novel. I self-published First Dead Body in 2014, basically because I didn’t want the hassle (and ignominy of being rejected) of finding a publisher. After my first novel came out, I vowed never to self-publish (I’m a writer, not a salesman) and researched potential publishers. I approached Fahrenheit Press as they seemed like a good fit and was taken on. My second novel, A Fatal Drug, was published in 2016.

I write crime thrillers with a historical (1960s and 70s) slant. My protagonists are journalists who are drawn into the action; the police are present, but these are not ‘police procedurals’.

I hope my books appeal to anybody who enjoys crime fiction.

I was told a while ago: “Write about what you know”. I hope my knowledge of the early 70s and newspapers is interesting.

I was in my 20s all the way through the 70s, and memories are vivid. I also lived in Pakistan in the very early 60s; and then worked as a journalist during what I believe were the last great days of regional newspapers.

All crime writers help, but I try and follow the characterisation and description that is accomplished so brilliantly by people like Ian McEwan, Alan Sillitoe, James Joyce and, of course, the maestro, Ian Rankin.


What are your main concerns as a writer?

Cadence and coherence, mainly. I believe every book must capture the reader and lead them through, gradually as the pace quickens.

Getting it right! Money is not the prime objective, nor is becoming a best-seller, but I want my books to be accepted as well-written.

No way. I write frenetically to get the plot down and this can be a base of about 50,000 to 70,000 words. Then I stop; put it away; go and re-visit the locations; immerse myself in the people. After a week or a month I go back and start the heavy edit, which is basically re-writing the novel from scratch, but with a structure already in place.

In addition to novels, you also write short stories. Do you use the same approach to short stories as you use when you are writing novels?

One of my short stories, "Under a Savage Sky" was published by Dahlia Publishing in Lost and Found in mid-2016. Another, "A Cup of Cold Coffee and a Slice of Life" was published by Bloodhound Books as part of the international anthology Dark Minds, with all proceeds going to charity.

Short stories and novels are very different and, for me, require a different approach. With novels, I find that the reader must be ‘captured’ early on and then gradually drawn through, their attention being maintained, a series of literary undulations leading to a constantly hinted at climax. With short stories, setting the scene and introducing vivid characterisation is vital. The plot is reasonably straightforward from the outset and is developed during the story; the finale needs to have a subtle, or even dramatically obvious, twist. A sort of ‘Agh!’ moment.


How would you describe A Fatal Drug?

A Fatal Drug follows the newspaper journalist's hunt for a front page lead through murder and torture, drug smuggling and the bid by villains to established a drugs supply business. The book was plotted in 2015, but then went through a very severe re-write, then an extended edit.

It was published by Fahrenheit Press and is available on Amazon as an Ebook (April 2016) and a paperback (September 2016).

Why Fahrenheit Press? What advantages or disadvantages has this presented?

Fahrenheit Press do things differently. When I approached them they were digital only and based their operation on Twitter ‘storms’ and a ‘book club’. The small stable of authors appealed in terms of genre (all crime fiction).

There were two initial disadvantages: Firstly, A Fatal Drug would not be printed, but be an ebook; and, secondly, it would not be on sale in high street shops. The first of these was handled after they’d read my manuscript and decided it would be printed; the second, I had to take on the chin, but the novel is still available – and selling – as a paperback through Amazon.

The time factor is not as easy as I first thought. Clothing styles were never of any interest, so I had to read books of that time and absorb magazines of that era.

The fact that my main protagonist is a reporter on a regional newspaper allows me the opportunity to have him doing things that I could only dream of. I really enjoy creating my characters – many of whom are amalgams of people of that time.

What sets A Fatal Drug apart from other things you've written?

This is the second in a series. I hope it is a development of characters and plot.

The next novel in the series will continue with the main characters (not the villains), but will also be much more complex. It starts by examining payola (bribing DJs to play records) and then moves through drug dealing, the Soho-based record industry, to eventually involve the IRA.

Being accepted by my peers as a writer. I was – and to a certain extent – still am, in awe of authors in all genres. After a career in business, even though it was a creative one, it is wonderful to feel part of a growing and developing creative environment that doesn’t judge, is always supportive, and encourages writers to share and help each other.