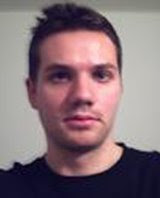 His latest chapbook, Bone Transmissions was released from Maverick Duck Press in 2009.

His work has also been featured in journals that include Sage Trail, Grasslimb, Sein Und Werden, Envoi and The Emerson Review.

I first started writing when I was a child and stopped for a while when I started secondary school, resuming at 24, when I was at university.

Being a writer was a childhood ambition. I remember reading an illustrated version of Robinson Crusoe when I was a boy and wanting to write the same kind of wonderful stories as [Daniel] Defoe did. It wasn’t until I reached my mid-twenties that I started to make it happen.

I sent out pieces to smaller journals such as Iota and Other Poetry to build up a portfolio, giving me the confidence to try larger, more established, journals such as Poetry Wales and The Kenyon Review (US).

I also discovered the internet in a big way. I found that using networking sites such as Myspace and Facebook were a great way to meet new readers and build up a following.

The poetry I write is based on my experiences and observations in my day to day life. I’ve found William Carlos Williams’ ethos “"No ideas but in things" -- see the world as it is -- to be inspirational and have tried to incorporate that idea in my work.

My literary criticism consists mainly of book reviews and I intend to start writing essays on literature in the near future.

I have also begun to get involved with translating poetry and my translation of Edith Södergran’s, “Stars”, appears in the February issue of elimae.

I try and write for as broad an audience as I can because I want my work to be enjoyed by as many people as possible. If you write within a niche, you not only limit your audience but run the risk of being pigeonholed.

Elizabeth Bishop, Sylvia Plath and Tobias Hill have influenced my poetry the most.

Reading Elizabeth Bishop when I first started to write seriously was a revelation. Poems like “The Fish”, for instance, struck me with their intricate level of detail. It made me feel as if I had stepped into the world Bishop had described, becoming part of the landscape.

The novelist Jeannette Winterson once wrote in The Times that she goes to poetry for the same way that “some people grab an espresso; for an energy shot [...]” Sylvia Plath’s poetry, for me, is that hit of espresso. Her poems have such intensity and such powerful metaphors they give me a jolt. Her skill at crafting metaphors has influenced me enormously.

The poet Tobias Hill has a knack for bringing out the extraordinary in the ordinary. Many of his poems are observations of places and things we are familiar with -- shops, subway stations, parks, streets. He takes these things and brings out their hidden qualities, something I’ve tried to do with my own writing.

Personal experiences have shaped my writing. Putting down these experiences on paper has been incredibly therapeutic. They also allow me to keep memories alive, which I think is important as you get older and the brain starts to deteriorate.

I have two main concerns: writer’s block and self doubt.

The first is frustrating and I’ve dealt with it by allowing myself to write whatever I want.

The second issue is something we all experience as writers. Sometimes writing can get you down and you start to question your own ability. You become tired of your craft.

I’ve found that it’s helpful to always remember why you’re writing and to spend some time on yourself, doing an activity which relaxes you.

Procrastinating. I tend to put off things a lot of the time and deal with it by working to a schedule and making lists.

I write everyday. Each session starts by brainstorming an idea, perhaps something I’ve seen or thought about. I’ll slowly develop this into an outline of a poem before writing a draft. I’ll take a break before editing and will edit the piece a few times before I’m happy to call it a day.

Dark Matter Lullabies (Why Vandalism?, 2008), differs from the others in that it is a chapbook of experimental poetry.

How did you choose a publisher for BoneTransmissions?

My latest chapbook, Bone Transmissions, is a mixture of poems about my experiences and observations about nature and people. The book did not take long to put together but some of the poems took several months to write.

It is being published in March 2009 by Maverick Duck Press. I chose this publisher because they were young and exciting and I wanted to be a part of that.

There is always a risk with some unproven publishers that your work won’t sell or find an audience. This isn’t the case with Maverick Duck Press, which has been growing steadily since it was founded in 2005.

What did you find most difficult about the work you put into the book?

I had a large selection of poems to choose from, and I found it difficult to pick out the ones that I thought would be suitable. There were so many I wanted to include but couldn’t because of the limitations of space.

In the end I decided to choose a selection that had been published in journals and add a few pieces that hadn’t, creating a varied mix of work.

The brainstorming sessions were pretty fun; I enjoyed looking at the different ways of describing a subject.

What sets Bone Transmissions apart from other things you've written?

The poems in the book are the ones I’m most proud of. They represent a maturity of style which has been developed over a number of years.

It covers similar subjects to my other chapbooks, especially with the poems that are about my experiences.

I’m currently working on a full length poetry collection entitled A Brief History of Electricity, which is named after my poem of the same name that will be appearing in the Indian journal Pratilipi in March.

It will contain new material, as well as older poems.

Appearing in journals such as The Kenyon Review. The journey to where I am now as a writer has often been difficult and I sometimes doubted my ability to get my work up to a level where it would appear in places like that. It’s a wonderful feeling seeing my name there.