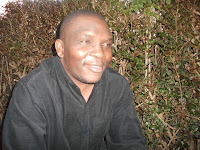 Julius Sai Mutyambizi-Dewa is a Zimbabwean poet, songwriter, novelist and playwright. Currently, he lives in Derby, in the United Kingdom.

His books include the anthology, Preaching to Priests (Timeless Avatar, 2007) and essay collection, Candid Narratives (I-Proclaim, ____).

He was among the first members of the Budding Writers Association of Zimbabwe.

In this interview, Julius Sai Mutyambizi-Dewa talks about his writing:

That’s a very difficult question ... in Grade 3 I acted in a school play as "The Narrator" and as we went into Grade 4, I remember my teachers were amazed at my long “compositions” but they were not bored.

In 1988, when I had completed the Zimbabwe Junior Certificate, I wrote my first full Shona novel titled, Shamisai. Unfortunately this was not published. Even at that time, I was writing short stories in both Shona and English. And I was brave enough to enter the competition for Zimbabwe’s then new National Anthem, needless to say I lost.

In 1990, I was among the first members of the Budding Writers Association of Zimbabwe. I knew what I wanted. I was a poet, songwriter, novelist, playwright and essayist ... a complete artist. I have acted on stage and written plays. I am also a recorded musician although I never really got the time to promote my first and (so far) only music album because I had to go into exile.

How have your plays been received?

In 1990, I formed a community-based theatre group, Maphupho Theatre Group while I was waiting for my Ordinary Level results. That group was the first serious vehicle for my original work, my plays and we toured in schools around Chitungwiza, Seke Rural and in Mashonaland East Province.

We also performed in night clubs at Murehwa Centre. Problem was when my O-level results came out, I had to continue in full-time education and that slowed things a bit. But I continued to act on a part-time basis and managed to have a lucrative contract performing for the Swedes. I continued to write plays which we performed at various venues.

My childhood friend, Last Chiangwa [Tambaoga of “The Blair That I Know" fame] kept things going by maintaining Maphupho as a full-time group and continued to perform in schools. When he finally decided to concentrate more on music, my brother Tendai and nephew John Jusa kept the group going. We then managed to get contracts to perform in civic and voter education for ZimRights and Zimbabwe Election Support Network.

So, although I was not published, my work was being acted on stage. Meanwhile, I was trying very hard to get published but that was an uphill struggle even though I had become a member of a writers’ organisation, the Budding Writers’ Association of Zimbabwe. In terms of getting published, my breakthrough came when I was in the United Kingdom and I got a contract from Timeless Avatar who published my anthology: Preaching to Priests.

I am an all-rounder. I am both a writer of fiction and non-fiction but overall my writing focuses on social commentary. I write for the adult niche. And when I am writing fiction, I write for people who love adventure. Sometimes I take topical issues such as the environment and try to paint a picture of the consequences of failure in that regard through moving drama. This has always been my audience and I have always tried to speak to them even with my first novel, Shamisai.

As a writer, which authors influenced you most?

I am reluctant to say I am not that widely read and this is controversial coming from a writer. I am not the perfect writer who did literature at school, no I never did that. I don’t know anything by Shakespeare or any of these famous guys. My experience, especially when I am composing something, is that reading or listening to other compositions will take away my originality. But I will be honest that I have read Lord Jeffrey Archer and Chenjerai Hove among a few people and they really impressed me.

My personal experiences have influenced me more than anything else. At the same time, there is also a lot of invention and innovation in what I write. Some of the things that I write about happened to me or people I know but a lot of it is pure fiction, pure imagination, to be precise.

Getting published has been a problem for me. This is a disincentive. When you have a family and your first book fails that makes it difficult to convince your family about the prospects of any future work. And at the same time, you also need to look after yourself.

It is not easy to make the breakthrough and make money as a writer. You therefore must have another way of sustaining you and your family while writing. Striking the balance is difficult. You need to carry the family with you. During the time you are writing, you could be using time that should have been given to your wife and children and that can be really taxing.

The best way to deal with challenges is to believe in yourself and try and explain the difficulties you face to your loved ones. If they understand that it’s a gamble, then you may find them joining the queue to ask what they need to do to make your writing a success.

People have different views on everything. I have a friend who thought that I made £100,000 each time I appeared on television. Similarly, many other people think I make money each time a newspaper publishes my article or quotes me or when I am interviewed. When I tell them I don’t, they ask me why I do those things then.

I write when I am in the mood to. I don’t force myself to write and I don’t want anyone to tell me to respond to such and such article. I find that very difficult.

Preaching to Priests, which is an anthology published by Timeless Avatar; Candid Narratives, collected essays published by I-Proclaim. I also have a completed manuscript, “Two Faces one Woman” and some two novels that are still work in progress.

Candid Narratives is a collection of essays. The problem has been on distribution and I am in the process of negotiating with my publishers so as to broaden the horizon in terms of marketing.

What sets the book apart from the other things you've written?

It is not fiction. It is a collection of essays on topical, political issues and is, therefore, different from everything I have written or I shall ever write.

My next book is already there. It is fiction but it is fiction with an eye for facts.
authors books interviews julius sai mutyambizi-dewa literature writing zimbabwe zimbabwean writers