Mark Adam Kaplan is a school teacher, a novelist and a screenwriter.

His first novel, A Thousand Beauties, was published by BeWrite Books in 2009. His second novel, Down, has just been picked up by Bewrite Books, and will be released soon.

In this interview, Mark Kaplan talks about his first picture book, Monsters Do Ugly Things.

How would you describe Monsters Do Ugly Things?

Monsters Do Ugly Things contains 36 illustrations about all things monstrous. It is a satire of social norms and common behaviors. Most of all, it's fun.

It is about inappropriate social behavior. Our monsters pick their noses, eat when they talk, make messes, etc. They also do 'pretty' things, like have friends, and share.

How did you come up with the idea for the book?

This book has been gestating in my mind for years. After the birth of my children, it just gelled. But the book is nothing without Glenn Scano's brilliant illustrations. I'd written the book and it sat in a drawer for a long time. Then I found one of Glenn's old pieces, an etched mirror, that I'd bought from a crafts show. The minute I thought of Glenn for this book, all the lights went on.

The book began even simpler than it ended up. Glenn's art inspired me to expand on the original idea. The book grew organically from our work together.

I wrote the book fairly quickly, then worked with Glenn's illustrations to hone the idea and craft the entire piece. Glenn worked every day, 12 hours a day for 10 months, stopping only for bodily functions and doctor's visits.

Where and when was the book published? 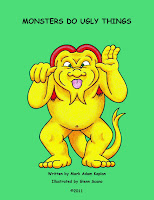 Monsters Do Ugly Things was published on November 15, 2011. Several issues (on the publisher's side) pulled the book from the shelves for a few days. Then it reappeared, all issues resolved.

We had been rejected form about a dozen agents and a handful of publishers. When we investigated self-publishing, we discovered how expensive it would be to print out high-gloss, hard cover books. Add that to my constantly seeing women baby sit their kids while shopping by stuffing an iPhone in their faces... it just made sense to go eBook. But we found there were no established outlets for new Children's eBooks. ePublishing houses also did little or no promotion for the books they published. It didn't make a lot of sense to give the lion's share of the profits to a company that wasn't really working for it.

One big disadvantage is that we have to market the book ourselves. Neither Glenn nor I are marketing experts. Because we are selling a picture book, many people want a hard cover to read at night with their children, and are thrown by the fact that we aren't offering one. But the future is electronic, and many people I know let their children play with their iPad. Why not have something specific, safe, and fun to give the kids to look through?

The most difficult part of this was preparing the book for ePublication. Glenn spent hundreds of hours tweaking the illustrations and the text, adjusting the coloring and the sizes, formatting the files and refining the edges

My favorite part was opening the files to see Glenn's artwork. Glenn's favorite part was creating the monsters. We spent more time laughing than doing just about anything else. We've known each other for 35 years, but this is the first project we've ever done together. We plan to do many more.

What sets Monsters Do Ugly Things apart from the other things you've written?

I normally write American tragedies, screenplays, avante garde plays. This is my first picture book, and is an entirely different world than I am used to building.

The book is similar to my others works only in as much as it is a different view of a somewhat accepted part of our society.

We are working on Monsters Grow Up, a sequel to this one.