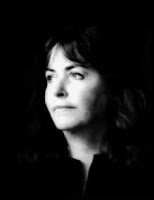 Crime and mystery author, Sally Spedding was born in Wales and trained in sculpture in Manchester and at St Martin's, in London.

She is also an award winning poet and short story writer.

Her books include the crime mystery novels, Wringland (Pan Macmillan, 2001); A Night With No Stars (Allison&Busby, 2005) and Come and Be Killed (Severn House, 2007) as well as the collection of crime short stories, Strangers Waiting (Bluechrome, 2008).

In this interview, Sally Spedding talks about her writing.

I began writing as a 10 year-old whilst staying with my Dutch grandparents in their amazing house on a mountainside in Wales, where the rows were constant. The tensions from leaving occupied Holland still very raw. I'd hide away in the attic and write and illustrate comic strips and stories, not fully understanding the tragedies they'd left behind.

I like blurring the edges between genres. Crime is too much of a pigeon-hole. I use horror, the supernatural (as I have experienced unbelievable things) and my first novel Wringland actually ended up being marketed as Sci-Fi.

My target audience is me. I write to deal with what interests me, and to unpeel layer upon duplicitous layer to reach the truth.

I'm pleased to see a good many younger male readers at my gigs/talks etc. I am not writing for your archetypal over-60's female who live in Okehampton and enjoy 'cosy' crime. I want to stir things up. Give readers a fright.

The late Friedrich Durrenmatt's The Pledge -- a brilliant study in obsession.

Have your own personal experiences influenced your writing in any way?

Certainly, places I've been to have played an important part in the creation of the books and short stories. Wales, France, the Malvern Hills, the Highlands of Scotland and the eerie east coast of Lincolnshire and Norfolk.

I create the setting first, then decide who has already been, maybe died there/and who will risk everything by arriving there ...

How did you decide you wanted to be published?

By accident more than design.

As an art student, I'd worked in an underground mushroom farm in the Peak District, where the crops were grown in dried pigs' blood. I'll never forget that smell. I wrote a short story based on this, and it won the Nottingham Festival's International Short Story Competition.

I was then approached by an agent who encouraged me to write a novel.

I do. I also am a published and award-winning poet, and I find the necessary economy of words and the search for the one right word is a great way to hopefully avoid 'lazy' over-writing.

I write the first draft in longhand then begin editing when typing up. I start mid-morning and keep going. The best days are free from clutter. Very precious. I usually take the MS up to bed at night so I can take a look first thing in the morning.

To get the structure and flow right. To edit and re-edit until -- well, does one ever reach perfection?

I deal with these concerns by working at them.

The challenges are external.

The demands of agents/editors/ accountants for a product that will keep selling. I find this so different from the world I inhabited as a sculptor and illustrator.

My latest finished book is set in rural Argyll in 1851 at the time of the Clearances. There are two main points of view and the alternating chapters reinforce this. It's gothic, there's horror, but like much of my work, it deals with betrayal.

I have just begun a part-historical thriller set near where I have a bolt-hole in the Pyrenees. Collaboration was rife during WWII and there are terrible secrets to be kept hidden ...

My agent is reading them now.

How did you choose a publisher for your latest published book? And, what advantages or disadvantages has this presented?

My latest published book resulted from the publisher at bluechrome seeing one of my short stories in the CWA's Best British Mysteries anthology (ed Maxim Jakubowski.) He asked to see more, and was very keen to make a collection.

He also published The Cool EP -- a really neat idea of three of us writers, in a unique format. Sadly, despite a promise, he forgot to enter the book for the CWA Short Story Award this year, and I found this frustrating to say the least.

Publishing is full of disappointments, but joy too.

Smaller publishers are more willing to take risks than the big outfits. I feel the future lies with them, and this gives me hope.

What was the hardest part of the work you put into the book?

I found getting the balance of themes right the hardest thing. It was crucial to have variety, but judging by the reviews, all seems well.

I enjoyed seeing these stories collated into a very handsome, creepy-looking book!

Because it's my first short story collection. Many of the stories have won awards, including the H. E. Bates Prize, but having them together in this way, adds, I feel to the impact.

That my parents lived long enough to see my fist books get published.