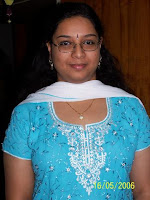 She published her first poetry collection, Loveliness of Dawn (MaluBen Publications, 2004), when she was 17 years old.

She followed this up with Flowers on the Violin which is due out shortly from Bluemango Books.

In this email interview, Winnie Panicker talks about her concerns as a writer.

I started writing when I was in my 7th grade. I was 13 then.

It was my dad who introduced me the site poetry.com and in the beginning I used to just write for fun. Later, I realized that poetry was a medium through which I could express myself freely. Then I started writing for that website often.

When I started writing, I never had the plan to be a published writer. I just wrote what I felt like writing.

When I was in my 10th grade, I had a set of poems in my hands and I thought of publishing them. I talked to my dad and he helped me contact the publishers.

My first book, Loveliness of Dawn, was published in 2004 when I was in my 11th grade. The book is a collection with 33 of my poems. The foreword was written by Shri Ayyappa Paniker.

I write about all topics. War, love, old age, childhood, nature, colors... all have become my topics.

I don't usually use rhymes or a pattern. Most of my poems are in the style of prose. I try to mix emotions with color, nature and so on. I also try to portray the ills of society through my poems. When I feel there is no other way for me to respond to what is happening around me, I write about it and in that way respond.

Who would influenced you most?

Well… I personally don't have a favorite writer or author. I like Sylvia Plath and Robert Frost.

There is no particular person who has influenced me, but my parents have inspired me and have encouraged me to write a lot. I would, right now, say that they are the people who have given me the urge to write.

Right now my publishers, BlueMango Books, are also giving me a lot of encouragement.

My friends and teachers, too, have played a big part. I have friends who critique my poems and who comment on how I can improve it.

I believe it's the obligation of every writer to defend the common man, their rights and freedom.

I have written some poems on social issues such as prostitution, war, corruption and so on. For example, my poem, "Filthy Roads" is about the tragic lives of some unfortunate women in the Red streets. "Broken Dreams and Hopes", on the other hand, is about war. It is about the despair of a father and mother who lost their only child in a war.

Till my 10th grade, I was in Saudi Arabia. There, I used to miss my home. I never got the opportunity to stay with my grandparents. I used to miss that part of my life and have written some poems about that. Poems like "one day even you will be".

After leaving Saudi, I experienced hostel life and there, too, I used to write about the loneliness. Being in my teens, infatuations have also found a way into my poetry.

I love being in Kerala. At first, the rituals around death, marriage and so on, all, were alien to me. Everything was a new experience for me. Kerala has given me more experiences than Saudi.

Being recognized as a writer is not an easy task. If there is anything in my poems that readers find worthy, then I consider it my blessing.

Right now, the biggest challenge that I am facing is to match my readers' expectation. I believe there is a standard to which readers expect me to write. I have to reach that.

No, I don't write everyday. I write when I get the urge to do so.

Usually, I keep the points that I want to write collected in my mind and jot them down when I get time. I usually like to write when it is evening and it is quiet.

Once I start writing, I never leave my poem incomplete or for a later time. Once I sit to write, I get up only after completing it.

When I start writing, I might not have a clear idea as to how the poem might end. But, when I write, the end just comes and I end the poem that way.

My latest book has been named Flowers on the Violin. I didn't write with an aim to publishing the book. It was just that I keep writing.

This book contains some of the poems that I have written from the time I was in my 10th grade till now. Later, I contacted Bluemango Books to see if they would publish the poems.

Actually, I start writing a poem only when I am fully confident about it. So when I write I don't find it very difficult. I sometimes find a difficulty in finding the correct words. But, if I sit for a while, I get the right word or at least a similarly satisfying line.

In the book, the poem "red" was written because I felt like mixing the color red with the emotions, love and anger. I was in a totally confused state while writing it. That is one poem which I found difficult to write.

One topic which I still cannot put into words is rain. It is a very common topic among all writers, but all my attempts to write on rain have failed.

I enjoy everything that I write. To pick out a few, I enjoyed writing "Flowers on the Violin". I felt there was some music in that poem. Then I enjoyed "Silence'. That was a poem that gave me some emotional satisfaction. There are other poems too, like "Axe Across my Heart" and 'The Call".

I feel extremely happy after writing. It happens to me after I write anything. Joy always follows my writing.

My previous book was published when I was around 15. And that book contained the thoughts of a child. My new book focuses on current issues, love, war, nature, colors, music, personal experiences... and the poems that I am more attached to.

As a person grows, his or her way of thinking will also grow. And maybe I also grew that way.

I believe, however, that it is the readers who should analyze the differences between the two book.

There will surely be similarities in the way I write.

I have written on things like nature, old age and parents in my first book -- and these topics have found a place in the second book as well. I wrote about them from a different angle.

I find pleasure in writing poetry and feel that it's the easiest medium for me to communicate. I will continue writing poems and, if possible, publish them .

As of now, I haven't started to think about my next book. If at all I am doing another book, it will surely be another collection of poems.

This article was first published by OhmyNews International.