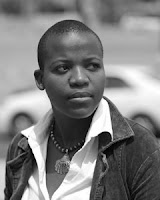 She has contributed material to newspapers and magazines that include the Sunday Independent, Oprah, Elle, Juice and Afropolitan.

Her debut novel The Madams (Oshun Books, 2006) explores race relations while her second novel, Behind Every Successful Man (Kwela Books, 2008) looks at what happens when husband and wife roles are reversed. Both novels are set in post-apartheid South Africa.

In this email interview, Zukiswa Wanner talks about her writing:

I started writing when I was five. As a prospective published writer though, I was kind of pushed into it by South African writer Lewis Nkosi who had seen some of my opinion pieces and suggested that I should consider writing fiction. I told him I was too much of a realist to write fiction and he told me it was the greatest bull he had ever heard.

I thought it a challenge and in two weeks I had written the first draft of The Madams. I sent it in its rawness to another Drum-era journalist -- the now late Doc Bikitsha -- and he loved it and suggested that I make it longer. He also sent me a list of five publishers to send the manuscript to and of the five, three accepted it. I picked one out of those three, went through a rigorous editing process and the rest, as they say, is history.

In my writing, I generally focus on the middle class because I believe I see enough of poor stories in Africa on CNN.

I write something that resonates with me and that I would enjoy. It's just coincidental that there are people who have read my work who seem to enjoy it -- which I suppose is an indication that ultimately, many of us have similar aspirations.

Zimbabwean author, Shimmer Chinodya because I love the way he manages to bring out serious issues through humour (and therefore not sound preachy). I also love George Orwell's cynicism.

Apart from language usage, not much.

I tend to use other people's stories -- so some of my friends have been bastardized in the two books that I have written, in one way or other.

What is your main concern as a writer?

My main concern is probably writing something that's entertaining enough for people to keep turning the pages in these days of short attention spans.

How do you deal with this concern?

I am yet to know how to deal with it because traditional 'intellectual' readers want me to be more serious when writing while people who generally have never read tell me how much they enjoy my conversational style. I shall have to keep 'practicing' so I can create a balance between the two.

My greatest challenge is being referred to as 'a good female writer' as opposed to just being a good or bad writer. I think it's awfully patronizing and I tend to dismiss people who refer to me as that because my writing (essays, blogs et al) is not limited to 'female issues' (whatever that is) and even if it was, women make up half the world anyway.

I write every day. Mostly emails and responses to people on facebook. But I also generally wake up at about midnight and write throughout the night daily.

I then take a shower, take my son to creche, and then come and sleep for most of the day unless I have assignments that just can't be put on hold.

The Madams (Oshun, Nov 2006) is a story of the friendship of three women in today's Johannesburg and the issues they experience.

The novel explores questions like: Is HIV/AIDS just a disease of those under 35? Does our Rainbow Nation tag mean we, in South Africa, are truly over our racial issues and racial labels? Is domestic violence merely a disease of the lower classes? In spite of women getting top jobs and the best Constitution in the world, are women really equal [to men] in today's South Africa?

The book is written in first person and the voice is that of one of the female protagonists.

My latest novel, Behind Every Successful Man (Kwela Books, June 2008) deals with traditionalism versus modernity and questions whether a woman can ultimately be satisfied with just being there for her husband and her children without pursuing her own dreams (well unless of course her dream is to be stay-at-home mom). It's written in third person and gives both the husband's and the wife's perspectives.

In Behind Every Successful Man, Nobantu decides she is going to leave her house to pursue her dreams, to the horror of her CEO husband Andile. He then has to learn how to be a father to his children as opposed to being a cheque book dad, while she has to learn how to be in business without the security of his money to fall back on.

How did you chose a publisher for your latest novel?

I left Oshun because the team that I had worked with on The Madams had all quit and I tend to like working with people I am familiar with (the royalty fee I was being offered at Kwela didn't hurt either!).

I chose Kwela because I was already friends with a lot of their writers and knew the inside scoop, I also knew their publisher and many in their team.

The advantage, in addition to the aforementioned higher royalty percentage, is that they have a better publicity team. People actually stop me in malls now to tell me how much they enjoy my books (the down side is that I can't walk around wearing sweats anymore!)

Nothing because I was commenting on a time I am living (the present) unlike I suspect, if I had been writing a historical novel (yet another reason why I think Chimamanda Ngozi Adichie is so brilliant).

What did you enjoy most

Sometimes I just have a line that feels right. In Behind Every Successful Man that line was from Nobantu's mom as repeated by her mother, "Better to cry in a limo than laugh in a taxi".

What sets Behind Every Successful Man apart from The Madams?

The style as I have highlighted above. And the fact that I actually have a male voice in Behind Every Successful Man.

Are there any similarities?

They both deal with issues that women I know have struggled with at one time or other.

Being featured as one of South Africa's Most Phenominal Women this year and my nomination for a South African Literary Award.