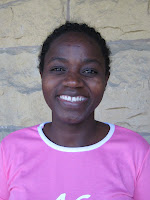 Zimbabwean writer, academic and civil rights activist, Zvisinei Sandi teaches on politics and literature in Southern Africa at the Center on Democracy, Development and the Rule of Law at Stanford University.

She has also worked as a journalist and was secretary general of the human rights watchdog, the Society for Gender Justice.

Some of her short stories have been published in anthologies that include Creatures, Great and Small (Mambo Press, 2005) and Women Writing Zimbabwe (Weaver Press, 2008).

In this interview, Zvisinei Sandi talks about her writing.

I started out as a very little child, at about six, seven years old. I used to make plays about my parents and friends and the colorful years back then -- the last days of Zimbabwe’s liberation war, the Cease Fire, the Assembly Points and the changes in lifestyle for everyone.

When did decide you wanted to be a published writer?

Very early really, in high school, although my parents fought it. They were afraid that my writing would get in the way of my studies. They did all they could to stop me, including taking away my manuscripts and giving me extra chores. When I got the Randalls National Essay Writing Prize in 1990, they were furious with my teachers for encouraging me. However that prize, handed over to the hardly formed seventeen year old girl who never before had been to a city, determined the course of my life. I decided then that I was a writer, and would always be a writer.

It’s about the parts of the world I have seen …

The world is my audience.

Every person lives a separate life, and hopes and aspirations and dreams that only they can tell to the rest of the world. I often find that I have a lot to say.

I would say, a great deal. I remember as a little girl, my first, faltering, almost ridiculous attempts at writing, and father telling me that what I really needed at the time was not to bury myself in a manuscript, but to go out there, and learn, get the certificates that would be my passport to the world, and see the world and then, if I still wished it I would have something to write about.

Now, having grown up, passed through grad. school and traveled, I believe I have something to say. I can write about pain, anguish, despair or joy with conviction because I have experienced these things and can talk about them with authority.

Zimbabwe has had a challenging decade, and in an economic meltdown, the publishing sector is always the first to go. At the moment my main concerns are about finding publishers for all the writing I did while in Zimbabwe. This includes a number of novels, short story and poetry collections.

Every night at 2 a.m., I wake up. That’s when my mind is clearest and I sit up to ponder on the dynamics of my world. That is when I do my writing. It’s a pattern I established long ago, as a young girl growing up in the Zambezi Valley, and the days where too full and fast to allow even a single moment of reflection.

I have written about four books, though I have not yet managed to find publishers for all of them. Two of the books, Through Hararean Mazes, and Tales of the Wild Savanna have been serialized in the weekly newspapers The Southern Times and The Sunday Mail (Namibia and Zimbabwe).

Various articles and poetry selections have been published online.

My novels, Vagrant Souls and Flight from the Inferno are still waiting for a publisher.

That would be Flight from the Inferno. It’s a fast-moving adventure story that starts in Harare, in 2000, and makes its way into the crowded market places of Lusaka, and then moves into war-torn [Democratic Republic of Congo] DRC.

The book virtually carves a path through Central Africa. When I started writing it, I had never been to any of the places. Carrying out the research was one of the most challenging jobs I have ever attempted. However, with the help of my college classmates, most of whom are now scattered in various countries across the African continent, it all came out beautifully. And, now that I have travelled the world, and actually seen these countries, I can present them with authority.

It was an exciting adventure putting the thriller together, building into it all the energy and color of the incredible Central African environment.

It’s that excitement you find in it -- that zazazu you find in the thrill of fear, and danger and that “Go! Go!” feeling you get when you encounter a life struggle.

What’s similar between this work and all writing, the world over, is the effort that went into it. Yes, you have a powerful story, and a clever way of delivering it, all that would amount to nothing without all those long, grinding hours. In the end, you do have to put in a lot of hard work.

At the moment, I am working on another colorful short story collection, covering all the places I have been to, and the exceptional people I have encountered.

My most significant accomplishment? Well, that's challenging for me to say, because you know what? It’s still coming. I see myself as just starting out my writing career, and when I am 90, curled up in front of a fire, surrounded by grandchildren and great-grandchildren, then I will close my eyes and -- this I promise you -- I will tell you of my greatest accomplishment ever.

The Bookaholic said…
Your blog is really nice and educating...good to read conversations with writers and know what goes on in their heads asides those stories!
April 3, 2009 at 4:17:00 PM GMT+1

Anonymous said…
While i used to admire writers as a young mathematical prodigy about the age of 5,i rememeber,i thought writing is for those who can't do maths or physics. Any one can be writer?.Take this young writer- she want to put in writing her dreams and many become fiction writers.Writing about one's experience is the pinacle of achievements.No wonder this young Zimbaveyan,by the way i would have been a professor in zimbabve if i accepted a lecturer post in Ile Ife in 1977, if i failed to fall in love with what ticked singapore and my admiration to what Lee Kwan Yew was achieveing for creating a new nation out of a multiracial,multicultural and multireligous community of 3 million people.Tell me if i am a writer?Good luck to you.vkp
August 13, 2009 at 3:31:00 PM GMT+1