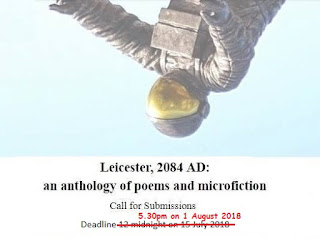 Leicester 2084 AD: New Poems about The City is now available.

An introduction to the anthology can be read on the Creative Writing at Leicester blog.

Could you write a poem or short fiction that shares an experience or aspect on or of future Leicester?

Your poem or short fiction could be about life, personalities or relationships with, within or around the city, its people, features, landmarks, peculiarities, history, or future.

What will Leicester be like in the year 2084? How will it get there? Where will it go or where did it go along the way?

There is a legend, at most points into the city, that says,
Welcome to
Leicester
Historic City.

Will this legend still be there in the year 2084 or will it have been replaced by another one?

● Poems should be 40 lines or less, and short fiction, 100 words or less.
● The poems and short fiction should have a strong, recognisable link to Leicester.
● Submissions must be in English. In the case of translated work, it is the translator’s responsibility to obtain permission from the copyright holder of the original work.
● If submitting a poem or short fiction which have been previously published please give details of where it has appeared and confirm that you own the copyright.
● Ideally submissions will be typed single spaced and submitted either in the body of an email or as a .doc attachment. Postal submissions will also be accepted.
● Please include a short biography of 50 words or less. This will be included in the anthology if your poem is accepted. If you do not send a biography, it will assumed you do not wish your biography to appear in the anthology.
● You may submit a maximum of three poems or three pieces of short fiction or a combination of poems and short fiction. You do not have to submit all three at the same time, but the editors can only consider a maximum of three submissions.
● Please send poems and short fiction to civicleicester@gmail.com by 5.30pm on 1 August 2018.
● We welcome submissions from writers of all ages, based anywhere in the world.

This blog post was amended on 22 July 2018 to show that the deadline for submissions for Leicester 2084 AD has been extended from 12 midnight on 15 July 2018 to 5.30pm on 1 August 2018. The rest of the brief and submission guidelines remain the same.

The blog post was further amended on 1 October 2018 to include a statement saying Leicester 2084 AD: New poems about the city is now out, and that an introduction to the anthology is available on the Creative Writing at Leicester blog.
Call for Submissions Leicester 2084 AD Microfiction poetry short fiction Welcome to Leicester