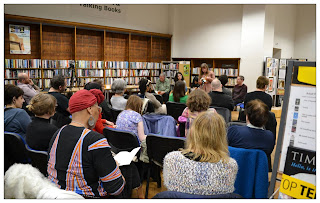 Individuals and groups that have an interest in the literary activity that takes place in Leicester and Leicestershire are meeting to look at what can be done to raise the profile of the scene locally, nationally and internationally.

The meeting is free and open to all and is taking place at the Bishop Street Methodist Church, 10a Bishop Street, on 13 December 2017, in Leicester, from 6.30pm till 9.30pm.

Speaking at the event are:

The event is being hosted by the Leicester Writers' Showcase, and will be chaired by Attenborough Arts Centre director, Michaela Butter MBE.

The speakers will give the view they have of the literary scene in Leicester and Leicestershire and what they think can or ought to be done to raise the profile of the scene. They will also take part in a discussion and Question and Answer session with those present.

In addition to the presentations, there will be a display of books by local writers as well.

Leicester Librarian Matthew Vaughan says, "The Leicester Writers’ Showcase started in January 2017 and hosts a literary event once a month at the Central Library on Bishop Street.

"The event we are hosting at the Bishop Street Methodist Church is part of the conversation people in the city and county need to have about the literary activity that takes place here and what can be done to increase its visibility."

Events that have been held as part of the Leicester Writers’ Showcase include launch-style events; readings, talks, and Q&A sessions; as well as, the Leicester and Leicestershire Writers’ Fair that was held during Everybody’s Reading 2017 and which is going to become a regular feature of the literary scene in Leicester.

Other Showcase plans include a Local Writers' Corner featuring books by local writers and which will be hosted by the Leicester Central Library.

Bobba Cass is a gay grey poet born in Seattle, Washington, USA but living in Leicester / Leicestershire since 1973. He organises a monthly poetry event, Pinggg…K! which celebrates the metrosexuality of verse. He is a member of Peoples Arts Collective. He is currently working on a series of fables for children, from Gramps with Love.

Bobba Cass will read from poetry and fables that draw on his life on three continents and on his experiences as an events organiser and grandad.

Emma Lee is President of Leicester Writers' Club. Her most recent poetry collection is Ghosts in the Desert (IDP, 2015). She co-edited Over Land, Over Sea: poems for those seeking refuge (Five Leaves, 2015) and Welcome to Leicester (Dahlia Publishing, 2016). Emma Lee blogs at http://emmalee1.wordpress.com. She reviews for The High Window Journal, The Journal, London Grip and Sabotage Reviews and has been shortlisted for the Best Reviewer Saboteur Award.

Emma will share insights from the Leicester Writers' Club which meets every Thursday at Phoenix Square in the heart of Leicester's Cultural Quarter. The Club is for professional and semi-professional writers and includes novelists, poets, short story writers, non-fiction writers, children's writers and scriptwriters. Members are both widely published and award-winners. The Club provides constructive criticism on work in progress, visiting industry speakers, social events, advanced masterclasses and a writers' retreat.

Farhana Shaikh is a writer and publisher born in Leicester. She edits The Asian Writer, an online magazine championing Asian literature and runs the small press, Dahlia Publishing which publishes regional and diverse writing. Farhana hosts the popular Writers Meet Up Leicester as well as Leicester Writes Festival of New Writing. In 2017, she won Travelex & Penguin’s The Next Great Travel Writer competition and is currently part of Curve’s Cultural Leadership programme.

Drawing on her experience as a writer, editor, publisher and events organiser, Farhana will give the view she has of the literary scene in Leicester and the region and suggest what can be done to raise the profile of the scene.

Matthew Pegg is Director of Mantle Arts, a participatory arts organisation based in Coalville, Leicestershire. He is also a published writer, playwright and graphic designer. Matthew will share insights from Mantle which, since 2015, has been running Red Lighthouse, a creative writing programme focused on publishing, development opportunities for Midlands writers and community projects.

In addition to that, Mantle Arts runs community projects that include playwriting projects in schools, song writing in care homes and a community audio drama about William Wordsworth’s time living in Leicestershire. Mantle Lane Press, Mantle’s publishing arm, issues a series of small books by Midlands writers, fiction anthologies and factual and historical books with a Midlands connection.

Cllr Sarah Russell is Deputy City Mayor with responsibilities for Children, Young People's Services, Leicester City Council. She has been a Councillor for 10 years and part of the City’s Executive team for the last 8 years. Throughout that time, Cllr Russell has been a passionate supporter of the Libraries Service and has taken every opportunity to promote books and reading. Despite no longer having responsibility for Library Services, Cllr Russell has continued to be the Reading Champion for the City Council and seeks to work with schools, young people and communities to promote reading (and writing) for pleasure as well as for formal means.

Henderson Mullin is Chief Executive Officer of Writing East Midlands which delivers writing-based projects and skills development opportunities across the region. Before setting up WEM in 2008, he ran Index on Censorship, a campaigning publisher which supports of freedom of expression. Henderson has worked in the arts sector for over 20 years and has sat on the Boards of several organisations including Writers and Scholars International, Free Word Centre, Human Rights House Foundation Oslo, Open Word FM, New Arts Exchange, FLUPP Literature Festival (Rio), Nottingham Literature Festival, and Nottingham UNESCO City of Literature, and the mighty Loughborough Foxes Women and Girls Football Club.

Henderson will be talking about what is happening on a regional and strategic level elsewhere and how WEM might support a process of developing the profile of Leicester’s writing and writers going forward.

James will give the view he has of the Leicester/shire literary scene and future possibilities. He will also talk about the Arts Council’s funding programme, Grants for Arts and Culture (formerly known as Grants for the Arts), which is open to writers, artists and organisations.

Michaela Butter MBE has over 30 years of experience working in the arts as a curator, promoter and funder. Currently Director of Attenborough Arts Centre, the University of Leicester's arts centre, she is responsible for developing an inclusive approach to a growing public programme of performing and visual arts, with a strong emphasis on supporting emerging talent, creative learning and community engagement. She also plays a growing role in wider cultural policy at the University of Leicester and beyond.