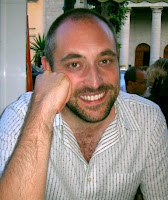 Robert Gould is an author, an art editor and a freelance web developer.

His blog novel, A Change in the Weather centers around Scarlet and Thomas who move from the city to start a new life in a small English village. The brother and sister soon find that things are not as they seem, and that the nearby Bracken Wood holds a secret which is about to be revealed.

In this email interview, Robert Gould talks about his concerns as a writer.

My first proper attempt at writing started at school when I was 12 years old. Thankfully it was never finished.

About three years ago, I had a few ideas for a novel I wanted to sketch out. I remember I used an old iBook, and it was a science fiction story, but I eventually relegated that to a folder and forgot about it. It's still on my laptop somewhere, and I'll probably go back to it when my current project is finished.

I started writing A Change in the Weather directly after that, when the ideas were just flowing and wouldn't stop. I got mid-way through it and then stopped for about six months (primarily because my baby daughter came along and I had my hands full for quite a while!) Then I decided to transfer the story to WordPress, and publish it chapter-by-chapter online as a blog novel.

I remember my own childhood, and my friends and I would play in the fields near our home, explore the graveyard and along the local steam railway line or go for long summer hikes in the country. We'd have the greatest of times, and it was this sense of adventure that I wanted to get across in my writing, because sometimes kids these days just don't know what they're missing.

I don't really consider myself to have a target audience, although young adults may find A Change in the Weather more to their liking than, say, 'older' readers.

What motivated me is an altogether harder question. I suppose one aspect was my childhood, which involved lots of reading and escaping into fantasy worlds from authors such as Roald Dahl, Enid Blyton, Lloyd Alexander and Ursula K. Le Guin.

I'll also admit to playing a bit of Dungeons & Dragons too -- so Gary Gygax was a big inspiration. Role-playing was all about escapism and exploring imaginary worlds. I liked the fact that anything was possible.

If you're talking about authors there are quite a few. In particular J. R. R. Tolkien, Neil Gaiman, Mervyn Peake, Terry Pratchett, Alan Moore, Jorge Luis Borges, H. G. Wells, George Orwell, Jules Verne. The list goes on. But mostly Tolkien though. His world-building and detail he managed to cram into The Lord of the Rings cycle was phenomenal. The races, the languages, the history, the myths, the locations, the maps; it was quite an achievement.

Not being able to write, being stuck, or writing yourself into a corner that in order to get out of, you find that entire chapters need to be re-written. To go back and re-write whole passages that you spent a long time crafting is the worst part.

Needing to write an idea down when you're in the car or some other place where you can't actually write is a big frustration. Trying to remember it afterwards can be a pain too...

My goal is to write everyday, although that isn't always practical -- especially where family life and writing overlap.

I also have a full-time job as an art editor and freelance web developer so I tend to relegate my writing to the night time, snatching some writing time as and when. Needless to say, it is a very slow process, and it isn't always the best solution, but I'd rather take my time than rush it.

There's only one at the moment, and that isn't finished.

What is your book about?

A Change in the Weather centers around the life of a brother and sister -- Scarlet and Thomas -- as they move from the hustle and bustle of the city to start a new life in a small village hidden away in the English countryside. Soon it becomes apparent that things are not as they seem, and they find that the nearby Bracken Wood holds a secret ready to be discovered.

I’m currently looking for a publisher, but as the novel is still being updated, I suppose this will have to wait until it is completed. I would dearly love to write full-time, but at the moment I'm quite happy to continue in this way.

When I began, I had trouble getting inside the character's heads, although as I continued to write, this became easier and easier and each character took on a distinct personality.

Definitely all the aspects of building the world; the maps, the locations, the myths, the characters, their motivations. Everything about creating the world was enjoyable, and this is a process that is continuing even as I write. Sometimes I'll go back to chapters and re-write them slightly, or elaborate on certain parts of the plot -- the fact that it’s a blog novel makes it a very elastic medium. The important part is making the descriptions believable.

Definitely the fact that this work will get finished. The others just didn't feel 'right' and so I lost interest in them eventually. A Change in the Weather is different in that it has spawned so many ideas and plot directions.

Once A Change in the Weather is completed, I'll be working on a prequel to it, set against the turbulent times of the last crusade in 1291 when the city of Acre fell.

In addition, I've got a prequel to the prequel planned, and this is set two thousand years before present and deals with events that are only hinted at in the current story.

The fact that I always wanted to write a novel and never thought I would.

They say that everyone has a story to tell, you just have to dig your heels in and make sure it gets written.

Anonymous said…
Great interview, it always gives other authors inspiration that they are not alone in struggling to maintain their writing and work.
September 23, 2008 at 3:12:00 PM GMT+1